The Mystique Of Rosewell

About an hour east of us, near Gloucester, Virginia, are the ruins of Rosewell, which was once considered “the best house in Virginia”.

(Now, those of you who know me know that ANY house takes second place in my heart to Bacon’s Castle, but on with this post.)

I had visited Rosewell twice in the past with  Marshall and my sister, June. And, once, when Motor Man and I were in the area, we had seen it from our vehicle. But my friend, Donna, had never been. So last Friday, we made the trip.  It’s important to visit well before warm weather and the accompanying mosquitoes.

Just a brief history: Rosewell was built in 1725 by the Page family. When complete, it was 12,500 square feet on three levels, and had 33 rooms and 17 fireplaces. Sadly, it was destroyed by fire in 1916. Through the years, time, the elements, vines and vandals took their toll on Rosewell.  In 1979, the site was donated to the Gloucester Historical Society by the last family to own it. Now, all that remains are four chimneys, a few walls and the wine cellar. In 1995, the Rosewell Foundation was formed, and since that time, it has worked to prevent further deterioration of the ruins.

This would have been the front of the house. During the 1700’s, visitors arrived by boat by way of the York River and then Carters Creek and were taken by carriage to the front entrance.

There’s just something about the ruins of an old structure that allows your imagination to run wild. 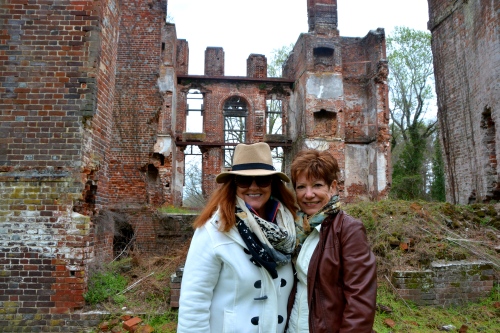 There was another family visiting Rosewell that day, so Donna asked if they’d like their picture taken together.  We soon learned that they’re descendants of the Page family.  Meet Jennifer, Gary, Ashley and Kelly.  (And I sincerely hope I have those girls’ names correct!) They were a delightful family, and we were honored to meet them and enjoyed chatting with them. 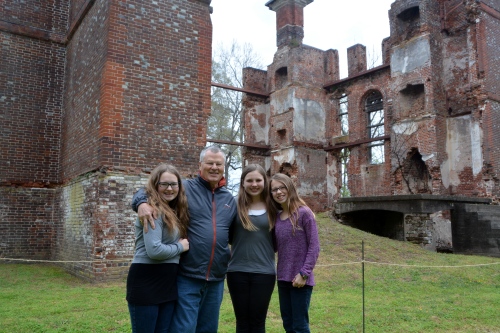 This may have been my third time at Rosewell,

But it was no less fascinating than the first.