Last Friday, Motor Man and I took a day trip to Salisbury, Maryland. We did some shopping, some antiquing and stopped for dinner in Cape Charles.

As we approached the Chesapeake Bay Bridge Tunnel on our way home, we noticed signs showing that the maximum safe speed limit was 35, and wondered why that was so. As we were paying our toll, we learned that a severe storm was quickly approaching.

We left the toll plaza, and as we drove toward the bridge tunnel, the weather was beginning to deteriorate. To our left were storm clouds, but to the right, the sun was still shining, and there was a rainbow. 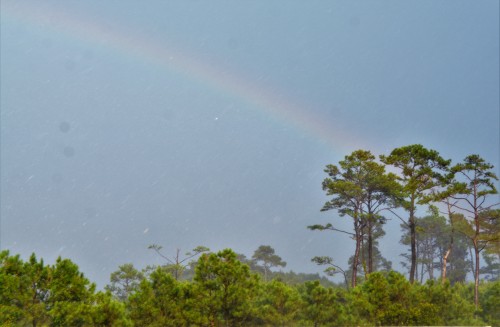 Lightning was flashing all around us, the wind began gusting, and soon the rain started. Neither of us could ever recall being in rain that heavy.  Everyone (including us) began pulling over to the shoulder of the highway.  There were vehicles just in front of us that aren’t even visible in this picture. 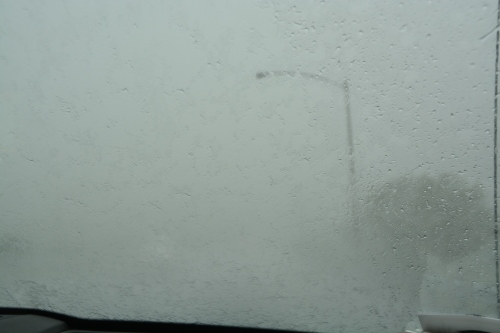 After a few minutes, the rain eased up somewhat, and we slowly began our journey across the bridge-tunnel.

Everyone was driving sensibly and obeying the 35 mph speed limit. But I must say, I was relieved when we emerged from the second tunnel to find that conditions were much improved.

The time that I took that above photo is shown to be 6:14.  We later learned that at 6:30, a 911 call came in that a tractor trailer was involved in an accident with another vehicle on the bridge. And that tractor trailer went through the guard rail and into the water. The bodies of the driver and a passenger have been recovered.

And yes, there was a synchronicity involved. On our way across the bridge-tunnel Friday morning, Motor Man made the comment that it had been a long time since a vehicle had gone off the bridge. Although the Chesapeake Bay Bridge Tunnel provides beautiful scenery, it makes me a bit anxious to travel across it. So I replied: “Let’s not even talk about that.”

We are so thankful for our safe travels and that we were spared any involvement in this horrible accident. Our hearts go out to the families of those two young men who lost their lives.

~These Days Of  Mine~