Recently, my friend and fellow blogger (and Virginian), Patti, shared, on her Facebook page,  this link in which the 50 states have been “reimagined as food”. I thought it was so interesting and creative, I wanted to share it with my readers.

I must admit that I was a bit disappointed that my home state of Virginia wasn’t given something a bit more….ahem….appetizing. 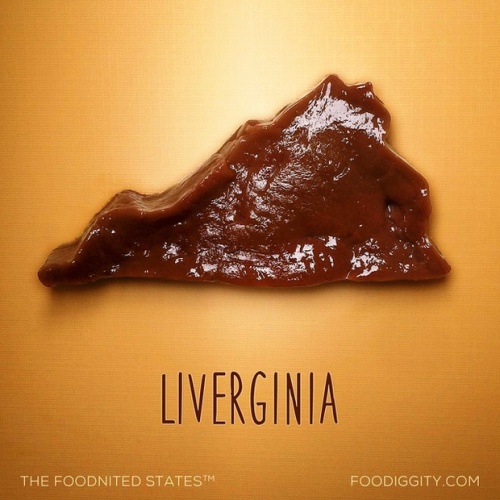 Why couldn’t our state have been described as something “cute”, like our neighbor, West “Virgingerbread”?:

To see all 50 states and learn what inspired this idea (cute story),  click here: http://mentalfloss.com/article/68266/all-50-states-reimagined-food-puns

Other favorites of mine included Louisiana, Indiana and Connecticut.

How about you? Which ones made you smile?

Friday, Motor Man and I attended a funeral for a member of our racing family. John had worked with several race teams over the years, including our engine customer, Danny. For the most part, he was the “crew chief” and was constantly working to help the team improve its performance.

About three months ago, John, only 49 years old,  was diagnosed with cancer. We all hoped that he could win that battle, but it wasn’t to be.

His service was upbeat, as he would have wanted.  There was a large turnout, most of us connected through racing.  As usual, we saw guys that we normally only see at a race shop or the race track, and again, as usual, we overheard: “Hey, man, you clean up pretty good”. (I think someone even said that to my Motor Man.)

Oh, and when it came time for John’s “final ride”, he had some special escorts: the cars and drivers who were such an important part of his life.

Different? Yes.  But perfectly understandable for those of us in the racing family.

Last Sunday, Motor Man and I got up at 0-dark-thirty and headed to the Flying Circus Air Show in Bealeton, Va., which is about three hours from us. This was the weekend for their annual air show/hot air balloon festival.   On the way there, I was in e-mail contact with my friend, Pam (of One Spoiled Cat), who lives nearby.

When we were about ten miles from the location, Pam sent me a message that she’d read on the web-site that the air show had been canceled because a storm front was moving into the area.

Since we were so close, we decided to continue on our journey.  When we arrived at the site, we were told that, yes, the event was canceled, but the bi-planes were still flying (and offering rides) and that a couple of the hot air balloons may launch.

Not the best day for photos, but the planes were certainly colorful.

Occasionally, the sun broke through those thick clouds.

Two balloons did actually fly, this being one. You may recall when Motor Man and I helped launch a hot air balloon in our town a couple of years ago.  This belongs to one of the balloonists we met that day.  Isn’t Firefly a fitting name for a hot air balloon company?

That balloon has such neat graphics:   a vintage motorcycle and race cars. “Right up our alley”.

This is video I took of the second balloon that launched last Sunday. In it, you can hear the burner in the balloon and the engines of the bi-planes, as well as my Motor Man saying: “She’s truckin’ along pretty good….”

Although the festivities were dampened by the weather on Sunday, we were told that Saturday’s event had record attendance.

And, no, we didn’t take a ride in a bi-plane (only room for one passenger), but I think  Motor Man has an idea for a future adventure….

Sundae Says: We Do Windows

Hello, everyone! Remember me? I don’t get much attention here on These Days, but I’m still around, trying to keep those Motor people in line.

Yesterday, Motor Mommy washed windows. I know that she couldn’t have done it without my help. While she was outside, I was snoopervising from inside – showing her the spots she missed. 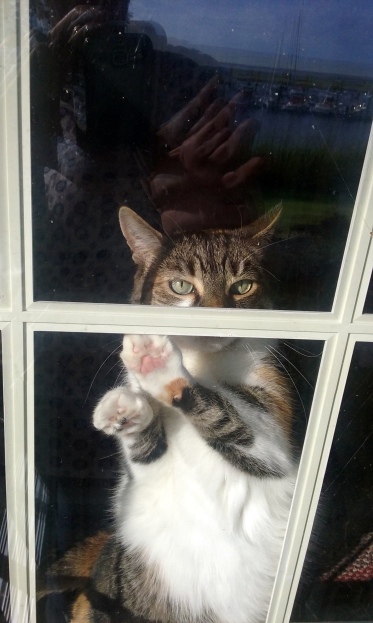 I was also keeping a close eye on her and that ladder.

When she first started the job,  I was trying to catch the paper towels from inside as she swished them around the windowpane.  She tried to make a video of me doing that, but, of course,  I wouldn’t cooperate.

I do have my dignity to protect.

(Oh, and she did an okay job on the windows.)

Posted in Days at Home, Sundae

Eyes On The Skies

It’s been awhile since I’ve shared photos of sunrises or sunsets, so today seems like a good day to do that.

This was the sunrise one recent (very humid) morning.  In the next few weeks, the sunrise location will change, so we won’t have such a clear view. 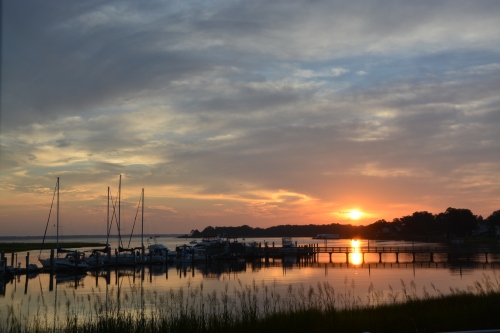 The sunsets have been pretty nice, too.  Just as the sunrise location changes with the seasons, so does the one for the sunsets.  We don’t see the sunsets as well during the fall/winter months. 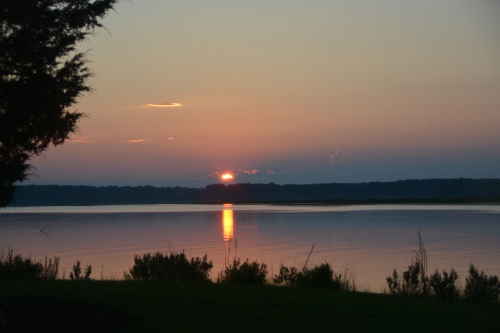 This next picture was taken “on the road”.  Motor Man and I were crossing a nearby bridge one morning just after sunrise. This cottage replaced one that washed away during a hurricane several years ago. 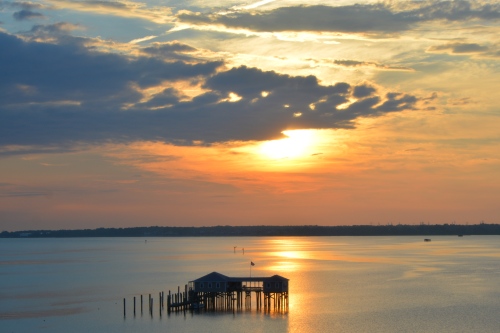 One of my Facebook friends recently posted a photo of a cloud that resembled a flying fish.  I, too, have noticed some “animal-shaped” clouds recently. I thought this one looked somewhat like a wild boar.

And I was undecided about the cloud in the center of this next photo.  My first thought (of course) was that it looked like a horse. But, then, once I uploaded the pictures to my computer, I saw a dragon. (He even seemed to be breathing fire…) 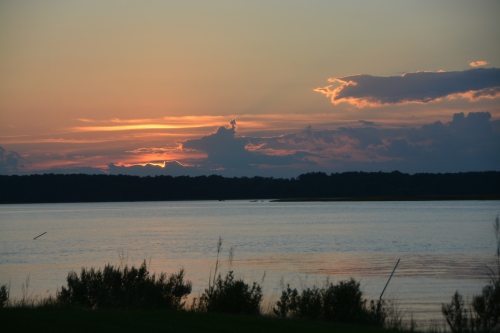 The sky is sometimes a busy place.  Do you find yourself looking for shapes within the clouds? It’s a leftover pastime from our childhood, I suppose.

Three years ago this evening, Gypsy found us.

She was at the back door of our shop: tiny, frightened, shivering (although it was August), but immediately came to us.

Within a week or two, she was settled in and most definitely Motor Man’s cat.

She has become our office greeter and won the hearts of some rough, tough racing guys. She helps me with office work and makes us laugh.

But her heart obviously belongs to Motor Man. (Oh, and she’s grown a little in these three years.)

Today, I’m sharing what I think is just a fun picture.

For over a week, we’ve had temps in the mid 90’s, no rain, and the heat index has been as high as 114. That’s meant that, most evenings, I’ve been outside in the flowerbeds with a garden hose, trying to save all those plants that I couldn’t resist buying back in the spring.

But, this picture doesn’t involve any of the flowers I planted this year.  The flower in this picture is a perennial, although I can never recall the name. And it’s plentiful. I’ve pulled up and thrown away quite a few of them. So, when I’m watering in that area,  I don’t walk around it: I walk through it.

A couple of evenings ago, I was outside watering. It was so hot, and as us Southern girls are prone to do in those situations, I was “glistening”. I knew that I had something caught between my toes, but I was in a hurry to finish my chores, so I didn’t stop to see what it was. When I finally took time to look down…. 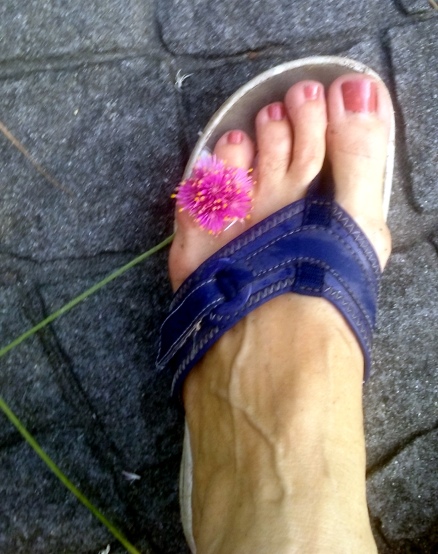 “….be sure to wear some flowers in your toes…”