We All Scream For Ice Cream

Yesterday, Motor Man and I had several errands to run in Norfolk. Whenever we’re in the area, we stop for lunch at a legendary restaurant known as Doumar’s.

Doumar’s, famous for barbecue and ice cream cones, opened in 1907 as a little ice cream stand at Ocean View Amusement Park in Norfolk. It was destroyed by a hurricane in 1933,  and the family relocated the business to its current location in 1934.

Abe Doumar is said to have created the first ice cream cone from a waffle at the World’s Fair in St. Louis in 1904. The cones were such a hit that, in 1905,  Abe designed and had an ice cream cone baking machine built. Today his nephew, Albert, still bakes cones on that same machine.

Motor Man and I met Al Doumar yesterday. He’s 91 years young. When we asked if we could have our picture taken with him, he graciously agreed. Another customer volunteered to take the photo, and Mr. Doumar wanted her to be sure to get the sign for the machine in the picture.

In 2002, Doumar’s received the Gourmet Magazine Award for the best ice cream cones in the U.S.

Motor Man and I agree. 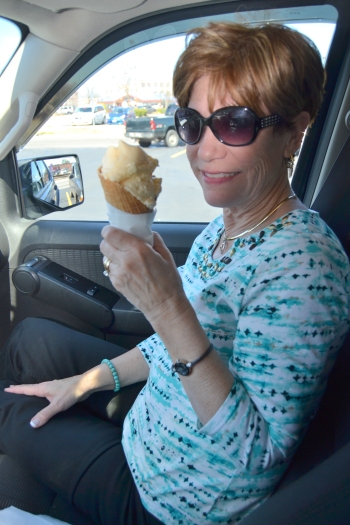 In 2008,  Doumar’s was featured on Diners, Drive-ins, and Dives. This clip shares more history and many old photos of the Doumar family and the restaurant.