Another Saturday, another beach trip for Motor Man and me.
Another Monday, another blog post featuring horses.

Saturday, we were treated to some action by the wild horses while we were in Carova. Perhaps the sunshine and fairly mild temps caused them to feel a bit frisky.

First, there was this handsome young guy, who was very interested in us. If he isn’t already named by the Corolla Wild Horse Fund, I think an appropriate one would be Diamond Jim.

After staring at us for a few minutes, he walked in front of our vehicle, plopped down and took a bath. 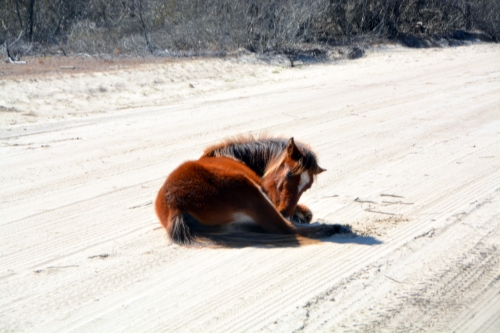 But then, we saw some REAL action.  Allow me to share this clip of a stallion, apparently “calling” one of the mares in his harem.

And I apologize in advance for the poor quality of this next video.  But it was so exciting (to me, anyway), I just had to share. His mare (or one of them) came running up to him, then another stallion happened along, and the two males had a bit of a “discussion”. (Note: that’s the mare getting the heck outta Dodge, and I can’t say as I blame her.)

I realize that, for those of you who are familiar with horses and are around them frequently, you see sights like this all the time. But it’s a rarity for us, and it was quite a show. Neither horse was harmed, thankfully, and they both ran off in separate directions. (Probably to meet again another day….)

Seeing these videos, it’s easy to understand why there’s an ordinance requiring that you stay at least 50 feet from the wild horses. We were stopped and safe within our vehicle while all this happened. I can’t imagine being in the path of these powerful stallions during one of their battles.