End of the week, end of the month. A couple of my randoms this week have a Halloween feel, even though it’s never been one of my favorite holidays.

1.) For those of you new to the blog, the following link is one that I share every Halloween. My son, Marshall, was an interpreter at Bacon’s Castle for ten years. During that time, in 2007, our local PBS station filmed a segment of their series “Halloween Haunts” at the Castle. Marshall was honored to be asked to play a role in the film.

2.) Speaking of Marshall, he texted me earlier this week to tell me that he’d pulled out the DVD of “Garfield’s Halloween Adventure” and had enjoyed watching it again. It first aired in 1985, which prompted his question: what was his costume that Halloween? “Old” family photos came to the rescue. (And old is in quotation marks, because the word old cannot possibly be used to describe anything pertaining to my child.) Marshall was a scarecrow that year, in a hat that most likely came from the thrift shop, probably one of my old shirts and brown yarn “straw”. Wish I knew what that was on his collar…

3.) Daylight Savings Time comes to an end tomorrow evening: time to “fall back”. I’m always reminded of church members years ago who would forget to adjust their clocks. In the spring, they’d arrive in time for the worship service, thinking they were coming for Sunday School. And in the fall, there would be some who would be there when we arrived for Sunday School, having already been there for an hour.  (My mom and I may have experienced that a time or two when we were the ones who forgot to reset our clocks…)

4.) Three of my friends and I have a girls’ day planned for tomorrow: Farmer’s Market, shopping and lunch. The forecast calls for rain, but I’m betting we’ll still have fun.

5.)  Yesterday morning, as I was driving out of our neighborhood, I had to make a u-turn to go back for this shot. 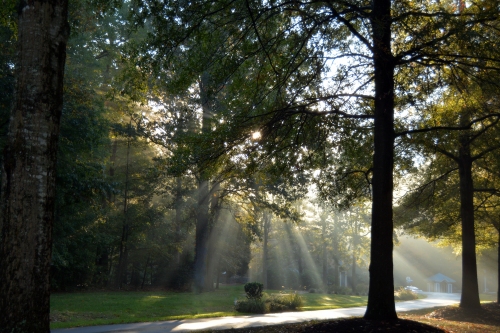