Today, I’m participating in Mama Kat’s Writer’s Workshop, and this is the prompt I chose:

And here’s my answer(s):

I almost named my child Amanda Ross, but chose Marshall Glenn instead because: we didn’t think our son would appreciate being named Amanda.

When Marshall was born, ultrasounds weren’t as technologically advanced as they are these days, so pre-natal information about the baby’s gender wasn’t so readily available.  Perhaps, if the parents REALLY wanted to know, the doctor or technician could make an “educated guess”, but that didn’t happen in our case.

I just always had the feeling that we would have a daughter. I could picture myself playing Barbie dolls and having tea parties with our little girl. I’d always liked the name Amanda, but was having difficulty choosing a middle name.  One of my great-grandmothers, long deceased before I was born, was named Ross Anna. I’m named after her, sort of. I thought Ross would be a pretty middle name to go with Amanda.

As my pregnancy progressed, I decided that it might be a good idea to come up with a boy’s name – just in case. I bought one of those little baby name books and started browsing. When I came to “Marshall”, I thought that could very well be a possibility. Marshall’s dad agreed, and since “Glenn” is his middle name, we chose that to go with “Marshall”. 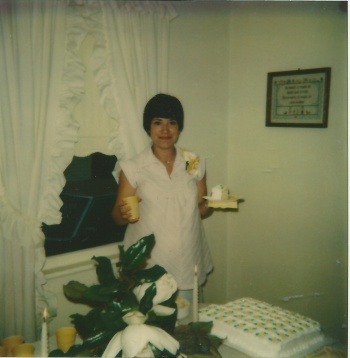 At my baby shower. Marshall was born about five hours later

Because of some complications, I had a Caesarean, which was fine with me. Having a healthy baby was all that mattered to us. As I was in recovery, still groggy while waking from the anesthesia, I asked Marshall’s dad if our baby was a boy or girl.

The answer, of course: “a little boy”.

That meant “Marshall Glenn” instead of “Amanda Ross”.  And Super Heroes and Matchbox cars instead of Barbie dolls and tea parties.

And  you know what?  There hasn’t been a single moment that I would have had it any other way.

Linking up to Mama Kat’s.