Another One For Our Menagerie

If you’re a regular follower of my blog, you know that we have somewhat of a “wild kingdom” here on our property. There are deer, ducks, Canada geese, squirrels, rabbits, birds…..  And although it wasn’t actually IN our yard, this week we had something quite different in the area.

Motor Man had come home Wednesday afternoon and was relaxing in the recliner. He glanced out the window to the marina, and something caught his eye. He said to me: “What in the world is that out there on the dock?”

I immediately ran to get the binoculars and then the camera.

Motor Man has lived in this house for over  25 years, and he’s never seen this here before.

A friend of ours is the commissioner of a state marine agency, so Motor Man called him. Our friend thought, at first, that perhaps it was an otter and asked that I text a picture to him. Meanwhile I also texted a picture to Marshall, who “googled” it and texted me back that it was a harbor seal.  Our marine agency friend texted me just a few minutes later to say the same.

The seal seemed to be enjoying the sun, and at one point, rolled over on his back. Unfortunately,  I didn’t get a picture of that. My camera lens was zoomed in as far as possible, and I cropped these photos once they were uploaded to the computer; I wish I could have gotten closer. 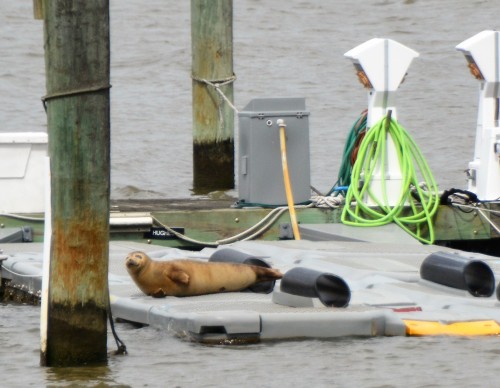 Although we kept watching him for quite some time, he must have slipped in the water when we weren’t looking.

We’ll definitely keep an eye out for him in the future.  I’ll let you know if he starts coming around for dinner.