Our trip last week to Indianapolis took us through the beautiful horse country of Kentucky.  It’s always my favorite part of the trip.

This beautiful water “tank” is located in the Lexington area.

This year, we arranged a tour of one of the farms: Coolmore at Ashford Stud.

On the afternoon of our visit, we had light snow flurries as we drove up the lane.

Although we didn’t have the best day for photos, the flurries added even more charm to our outing.

Now, this little country girl knows absolutely NOTHING about race horses (or everyday horses for that matter). But I do think they’re all beautiful and love taking pictures of them.

Our guide was a wonderful young lady named Bailey, who will be graduating in May from the University of Kentucky with a degree in equine science and management. We were fortunate to be on one of her final tours at Coolmore.

In the first stable we toured, we met “Munnings”.  Isn’t he so handsome?

I thought it was interesting that he seemed to be agreeing with what Bailey was saying regarding stud fees. (Guess that’s a guy for you.)  And I regret that I stopped the video in the middle of Bailey’s information.

But, then,  we met a celebrity…..this is “Justify”, the 2018 Triple Crown winner.  That’s impressive even to those of us who know little about the horse racing world. It was exciting to be so close to such a famous horse.

Later, on the tour, we met “Air Force Blue”.  He also showed off a bit for us.

You can hear Bailey in that video mention the race horse “Cigar” and say that he was an interesting case. Cigar was a successful race horse, but was quickly retired from his stud duties when it was determined that he was completely infertile. Uh oh. (Had I not stopped the video short, you would have heard that from Bailey.)

We stayed overnight in Louisville and went for a carriage ride after dinner. Our horse was a Percheron/Friesian mix named “Joey”. Those blue lights in the background were on our carriage. It was cold, but as you can see, we went prepared. AND, our high-tech carriage not only had blankets, but also heated seats. 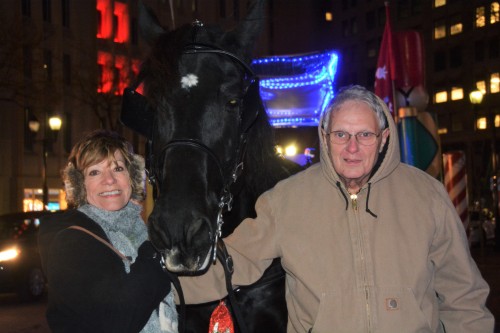 Before leaving Louisville the following morning, we rode out to see Churchill Downs.  Although we’ve driven through Louisville many times, and stayed overnight there a few times, we’d never driven by the track. 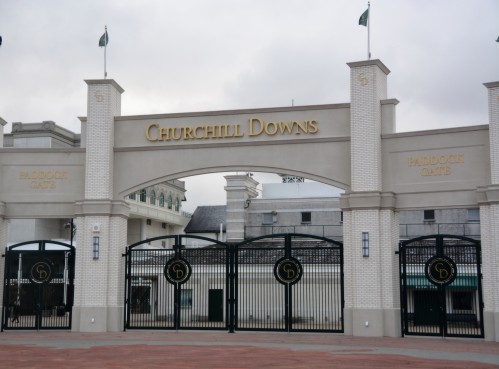 Very impressive.  But, then, most everything about Kentucky Horse Country IS.