The Good, The Bad, The Ugly, And The Irony

Today, I share the latest in the ongoing war between my plants and the deer and rabbits.

First : The GOOD.  I had one volunteer sunflower this year.  (Most likely a bird “planted” it as a result of the nearby bird feeders.) And thankfully, it chose to grow in an old enamel coffeepot on our deck (safe location from critters). What makes it even nicer is that I had “that old moss” already planted in that pot.  I think it makes a sweet combo. 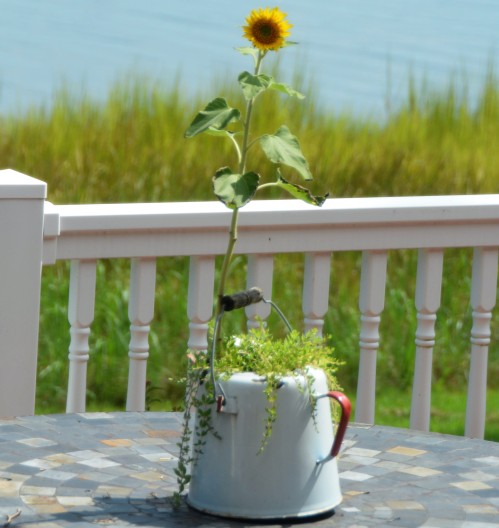 Sunflowers are SO cheery. 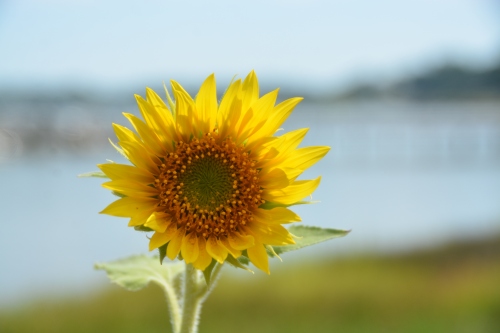 Another item in the “GOOD” category: this mandevilla I planted earlier in the season has done really well. The tag said that it was the climbing variety, so I thought it would be pretty on this old trellis. Obviously, this is a mounding variety instead, but it’s obviously happy.  On the deck, it’s safe from the “critters”. 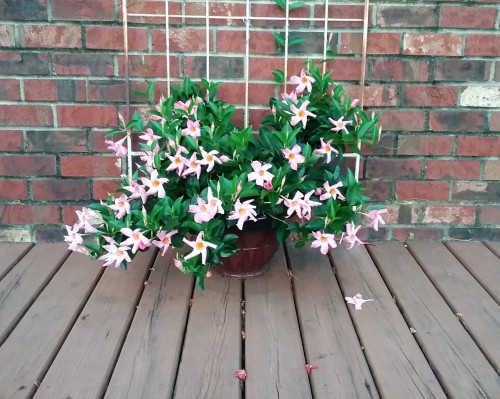 Next: the BAD. This spring, I had bought a beautiful hanging basket of purslane in shades of a pretty coral color. Thinking I had come up with a simple, but effective deer fence (one strand of monofilament fishing line strung about 3 feet off the ground), it had thrived all summer. Sadly, I don’t have a before pic.  I believe this is the work of two young fawn, who obviously fit UNDER the fishing line fence. This was ONE night’s work last week.  I’ve since moved it to the safety of the deck, hoping it will bloom again before frost. 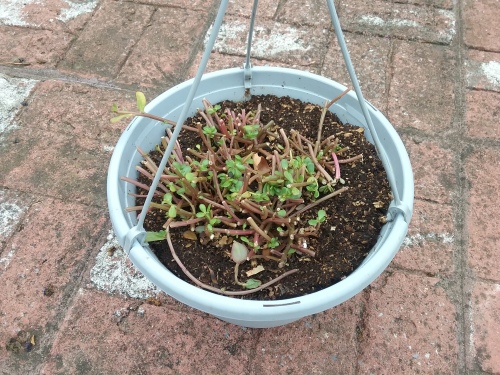 And: The UGLY.  One of my favorite plants is a cypress vine (or hummingbird vine).  I first saw it growing at Bacon’s Castle on an old wooden fence.  The vine itself is so sweet and dainty, and the flowers are tiny, star shaped blooms in red, pink and white – all on the same vine.

Every year, I have a couple of these to volunteer from seeds I planted several years ago. This year, the two that volunteered chose a difficult location: immediately beside one of our deck posts. Motor Man helped me modify one of the cages that he had previously made for me, cutting it to make it semi-circular. If you look closely, you can see that dainty little vine, twining up the black trellis. 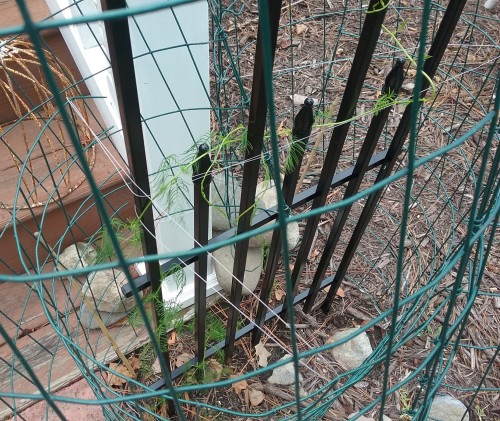 And I had ONE tiny white bloom. 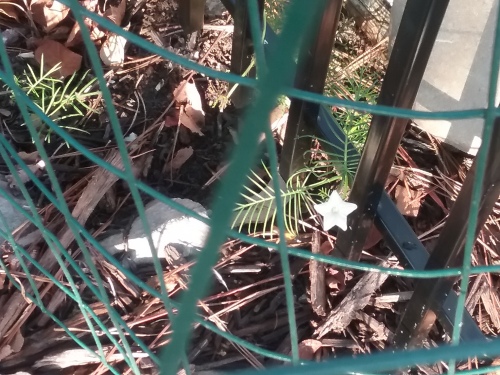 There was a very small space between the post and the cage. And…..evidently, one  of the baby bunnies I’ve recently spotted discovered that tiny space. The next morning, the bloom and much of the vine was gone.

So….. I used rocks and fishing line to close up that hole. 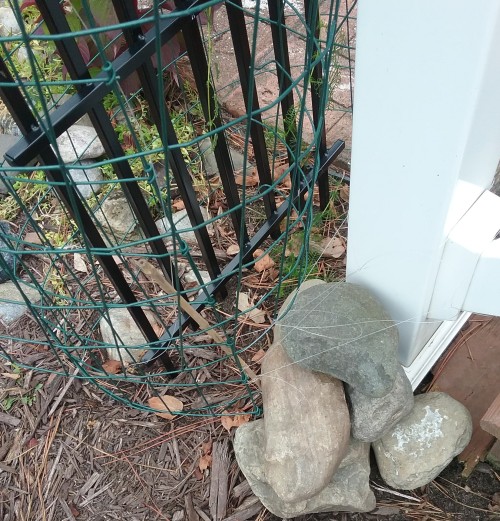 Finally: the IRONY. You’re probably already thinking that I’ve created something very ugly to protect something so pretty.

Further IRONY,  I chased away the neighborhood cat yesterday as she was plotting to attack one of the baby bunnies.