My family and many of my friends will know this story. But some of my readers may not. Warning: lengthy post ahead.

In 1946, my maternal grandparents purchased and began operating a little country store in Bacon’s Castle, Va. They lived in the back of the store: there was a living room, kitchen, two bedrooms and a bath. Oh, and two screened-in porches.

My earliest childhood memories include daily visits to Grandma  (Granddaddy had passed away before I was born.) Mom and I lived less than a quarter mile away.

Grandma closed the store in 1966, when Virginia Retail Sales Tax took effect, and she passed away three years later.

Friday, demolition began on the building that was her store and home, and highway improvements in that area will begin shortly.  The building had fallen into disrepair and hadn’t been occupied in many, many years.

Since the above photo was taken, one of my cousins had asked for and been given the two front doors and had repurposed them in his home.

This was just before demolition began.

Motor Man and I were able to be there last Friday when the first nudge of the excavator bucket began the sad process. 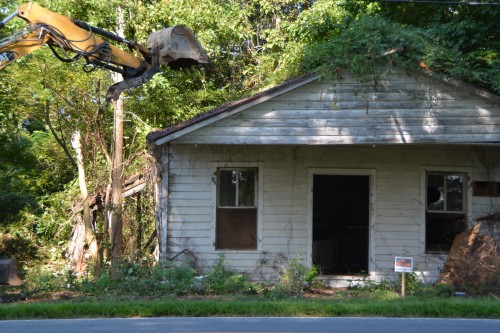 And there we sat for most of Friday and again Monday morning.

The building may now be gone, but I have a few family photos from both inside and outside the store. In this first one, family members are gathered around Grandma’s kitchen table. My grandmother is in the background. To her left is the china cabinet that my dad had made for her, which now has a place of honor in our dining room. Others in the picture are my two sisters,  Uncle Benny, Aunt Doris feeding cousin Lona, and me looking on.

Cousin Warren (the one who was given the front doors), when he was a young boy beside the store.

Another photo of Uncle Benny, his wife, Doris, their daughter, Lona, and my sister, Rose, sitting on the counter in the store front. The  shelves (bare since 1969) were still on the walls when the building was demolished last week.

This was probably the last photo taken of my sister, Rose, before her murder in April, 1969.  That’s Uncle Andrew, his wife, Virginia and Aunt Doris with her in Grandma’s living room. Oh, how I’d love to know who else was in that room. 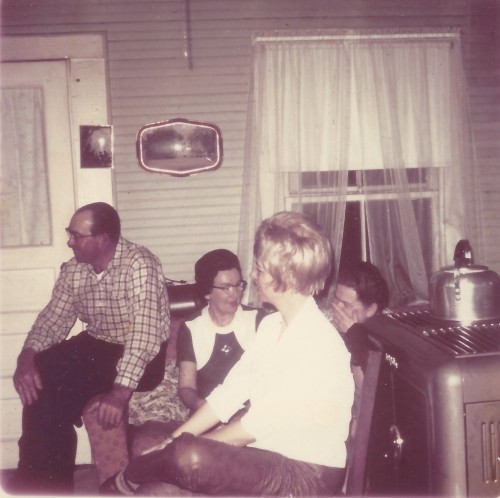 I was able to go in Grandma’s store recently and snapped this picture of the exact spot where that photo was taken.

And I have my memories: countless evenings spent in the store with aunts, uncles, cousins, Mom, Grandma and all the stories and laughs they shared. The Coca-Cola Cardboard Christmas Santa signs that we threw away after the season, not having any idea what they’d now be worth. Grandma selling stick bologna and hoop cheese by the pound, wrapping them in butcher paper and tying them with string.  Eating that cheese on ginger snaps.

Grandma cooking fried potatoes and onions for my Uncle Thomas on Thursdays because his truck route brought him by her house. She saved a bowl of them for me to have during my next visit.

Spending an occasional  night with Grandma and feeling the love when she stacked quilts, blankets and pillows on the floor beside the bed in case I fell off.

Grandma sitting in her goose-neck rocker in the living room, watching the afternoon soap operas, but only the ones on CBS.  Mom being there nearly every day, watching them with her. My school bus driver knowing to stop  if Mom’s car was there. And it usually was.

Learning to blow bubble-gum bubbles one summer afternoon on Grandma’s screened in porch. How proud I was.

Grandma ‘barring’ the doors at night when she closed the store. With Motor Man’s help and the help of some friends, I was able to salvage a few things from the store…..including that old wooden bar and the iron brackets that held it in place. 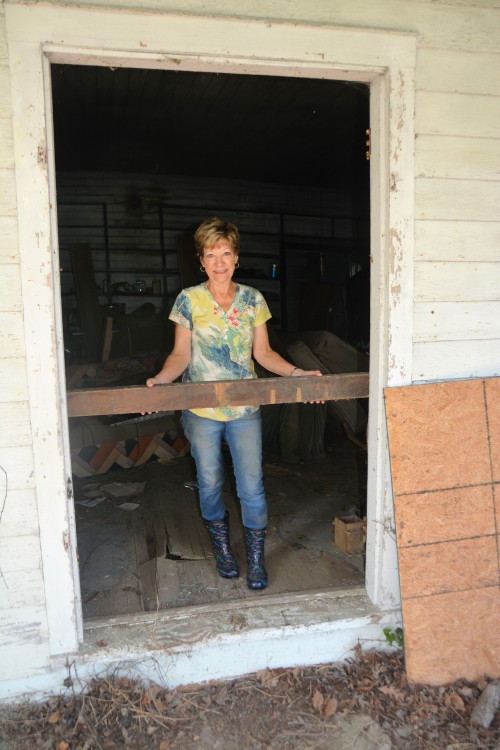 Pictures and memories will have to do now.

And you can bet that I won’t ever pass by that vacant lot without remembering all those special times spent there.