Yes, I know that’s SUCH a corny title. But, we were rather adventurous last week when my niece, Donna, and her son, Connor visited. Today, I’m going to share some photos from our excursions.  Fasten your seat belts: it’s a fast-paced post.

As you may have expected, we made a day trip to the Outer Banks, where we saw 23 horses. As we came over one of the dunes, “Eagle-eye” Connor was the first to spot this little one and his mom.  This is baby Liberty, first discovered on Memorial Day weekend. The name was suggested by Corolla Wild Horse Fund Facebook page followers and became official.  He’s a brownish/gray color now, but I’m told he’ll grow to be a beautiful black stallion like his dad. 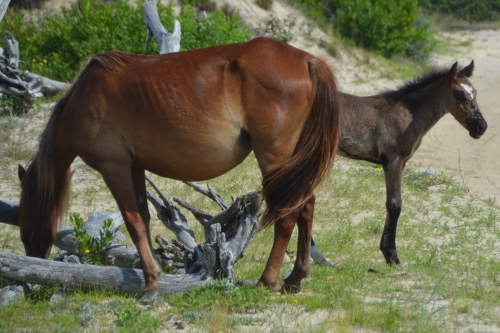 (zoom lens and photo was cropped after uploading)

A few weeks ago, when Donna learned that Motor Man and I had gone on a hot air balloon ride, she and Connor decided they’d like to do that during their visit with us. So… off on another early morning adventure.

Connor and Motor Man helped the crew prepare the balloon for our launch.

We flew over a lake…

…and saw our reflection. 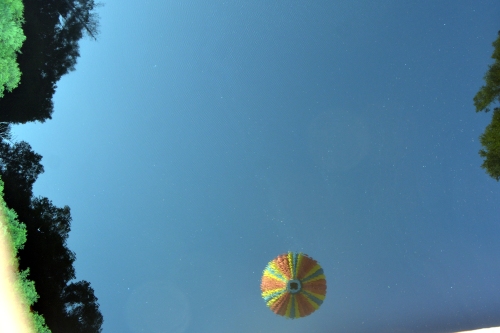 And posed for a picture once we landed.

On their last full day with us, we traveled to Virginia’s Eastern Shore to the village of Chincoteague.  We took a boat tour, where we saw more horses, waterfowl and dolphin. Cap’n Fred even scooped up a horseshoe crab to show us – up close and personal.  He told us it was harmless and offered us the opportunity to touch it. Um, yeah.  Donna was the only one brave enough to take him up on that offer.

After a wonderful tour, it was time for yet another photo. Cap’n Fred was kind enough to join us. 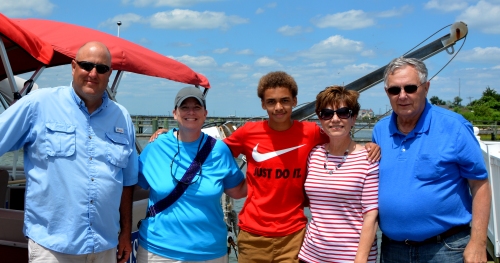 It was nice to stay busy doing fun things, but, as you can imagine, that made the time go by so quickly.  Before we knew it,  it was time for Donna and Connor to head home.  Guess we’ll get to work on ideas for adventures for their next visit.