This was an incredibly sad weekend. Saturday, we learned that the husband of a dear friend suddenly passed away the night before.  Later that day, news came that the mother of one of Marshall’s classmates lost her battle with cancer. Motor Man heard that the wife of one of his racing acquaintances passed away from a health issue.

And yesterday afternoon….. I received the call that Eddie, my oldest nephew, born when I was just two-and-a-half, had died of natural causes.

When Eddie was born, my sister, June,  and her husband lived in Syracuse, New York.  While researching old photos for this post, I discovered one that I’d never seen before.  It was on a thumb drive of files from June’s computer. I’m guessing this is Eddie as a newborn. (It could possibly be his brother, John, born just ten months after Eddie. But the parents sure have that “smitten with our first baby” look.)

Soon after that, June and her family moved to our area, and it was then that Eddie and I became like sister and brother.  They lived in our little town so we visited quite often.

A few years later, June and her family (which by then included Eddie’s siblings, John, Donna and Barb) moved several miles away. So we didn’t see each other quite as often, but we still had frequent family visits.

That’s Eddie,standing by his mom

We celebrated birthdays, Thanksgiving and Christmas holidays and often just visited for no reason.

Sometimes for my school recess or PE, we’d be required to play softball. I was taunted (and always the last one chosen for a team) because I could never hit the ball. On weekends, Eddie would try to help me.  Neither of us had a ball and bat, so we used a stick and black walnuts to practice.  Surprisingly, I managed to connect with those black walnuts much more often than I ever did a softball. Perhaps it was who was pitching to me? 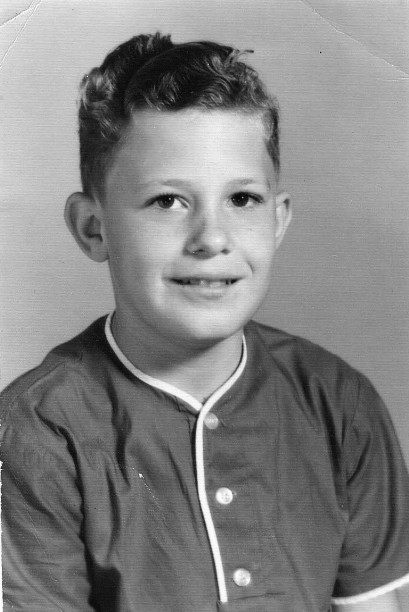 Many summer afternoons, we watched Dark Shadows and were terrified together.

In our adult years, we saw each other less often, so those family gatherings were even more special.  This was taken during a Christmas visit from Eddie when Marshall was six months old. My sister, June (Eddie’s mom) is to the right.

At a more recent family gathering in our yard a few summers ago,  Eddie  is obviously enjoying time with his nephew, Ray.

And that’s how I shall remember “my little brother”….relaxing, smiling and happy.