You may have guessed by the blogging break I took last week that Motor Man and I were away on a trip.

Once again, we visited Animal Adventure Park (AAP) in Harpursville, NY, home to the world famous giraffe, April.  Our first time meeting April was last summer, and I really didn’t have any thoughts of returning. But, I’m a member of a Facebook group whose common interest is all things AAP, and especially their beautiful giraffe family. The group planned a visit to the park last week, and Motor Man and I wanted to join them. There were around 225 of us, including some from Canada, England, Australia and all over the United States.

AAP is located in Broome County, which was experiencing torrential rains while we were there. One evening while we were at dinner, cell phones began sounding an emergency flash flood alert.  Thankfully, the Park isn’t in an area subject to flooding.

So, you may recall that April gave birth last year (in April) to a son, Tajiri. He’s not a little boy any longer. Here I am with the “guys”: Dad, Oliver, on the left, and Taj on the right. You just don’t realize how tall giraffes really are until you’re in a building with them; keep in mind that, in this picture, both of them have their heads bent down (waiting for carrots).

And our sweet girl, April… 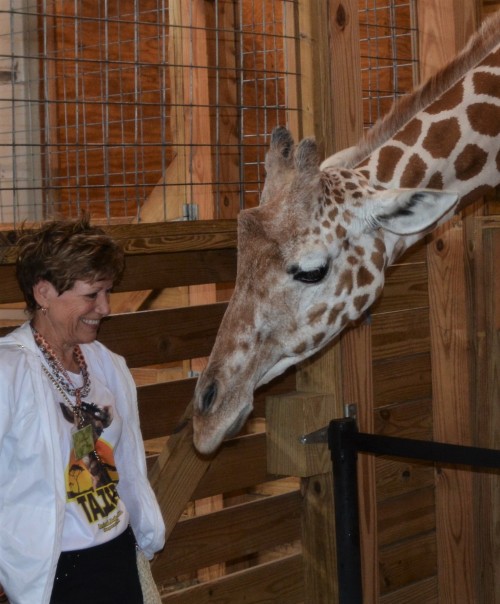 …who is VERY sneaky about grabbing an entire handful of carrots.

And a kiss from Taj.  (Well, okay, he WAS just looking for carrots, but I can pretend that it was a kiss…)

The owner of the park, Jordan Patch, is an amazing young man, who has time for EVERYONE. I can’t imagine how many photos he’s been in since April brought such fame to AAP. And he’s smiling in every one of them. 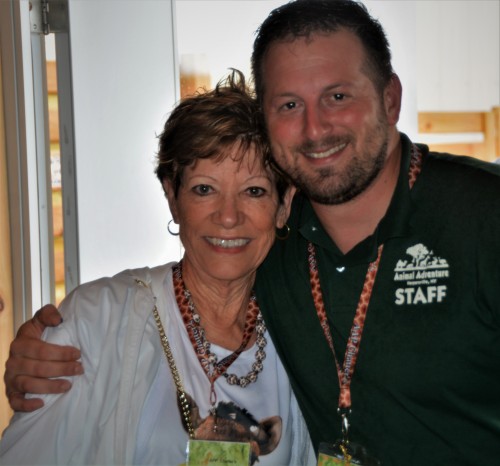 Our visit included a Meet and Greet with others in the group the first evening, then a day at the park. If I tried to name all the species of animals there, I would surely miss many of them. But, just for a few (in addition to the giraffes): kangaroo, water buffalo, alligators, llama, caribou, African lions, sloth, zebra, lynx, wolves, bears, bison, camel, tortoise, porcupine, exotic birds, domestic farm animals….  All very well taken care of and loved by the staff.

This was one of my favorite non-giraffe pictures of the day: a squirrel monkey attempting to pick flowers from just outside his enclosure.

“Visit Binghamton” was live as the Park opened that morning, and Motor Man and I have a brief appearance and actually put in a plug for Virginia. “Our part” starts just a little after the 6 minute mark if you’d like to fast forward:

Dinner that night was in a pavilion tent at a beautiful venue, Traditions At The Glen. We had a wonderful time, but it POURED rain while we were there.

Motor Man and I (and probably hundreds of others) had a picture with Jordan.

The rain had, thankfully, subsided somewhat before time to leave.

It was a very quick trip, but another wonderful experience. We definitely would recommend Animal Adventure Park to anyone. It’s a beautiful, clean facility with an incredibly friendly staff.

I’m so glad Jordan decided to put up that tiny web-cam last year to document April’s pregnancy. I never thought much about giraffes before that; now I think they’re fascinating. And because of that web-cam, hundreds of us became acquainted online and now many of us have met in person.

Oh, and in case you haven’t heard…..April is expecting again: due next spring.

This entry was posted in Traveling Days and tagged animal adventure park harpursville ny, april the giraffe. Bookmark the permalink.

12 responses to “Another Adventure”