Although this will be the last post regarding Christmas gifts (I think), the season brought so many thoughtful surprises from family and friends, this series could have continued for quite a while.

As I mentioned earlier, my niece, Donna, and her son, Ray, spent Christmas with us this year for the first time. Last summer, the two of them had traveled to England and Scotland, and they brought back some special gifts for me.

Our genealogy has been traced back to England on my maternal side (Warren) and Scotland on my paternal side (McGuriman). Donna and I are both very interested in our family history, so she was, understandably, excited about her trip.

One of my gifts from them was a cashmere scarf in our family’s tartan from Scotland.

Also, a pin, officially known as a clan crest badge.

During her visit to England, Donna learned that two of our Warren descendants from the early 1500’s and 1600’s, are buried beneath St. Mary the Virgin church in Ripple, County Kent, England. The church isn’t open every day, and an appointment is needed for admittance. Because Donna didn’t know this in advance, they weren’t able to see the interior. But she brought this stone to me from the foundation of the original church.

Here’s more info she shared in an email to me:

Inside 2 Warrens are buried “Monuments: 1663 2 reset wooden plaques on nave south wall bear brass inscriptions and shields to Thomas Warren, d.1591 and William Warren d.1612, both ‘chief customers’ of various Cinque Ports.”
The current church (1800’s) was rebuilt on the foundations of the older church. You have a piece of the foundation. The Warrens lived in Dover until late into Elizabeth 1st reign, in the late 1500’s, early 1600’s, they moved to Ripple, which is where Ripple Court or Ripple Manor was located. 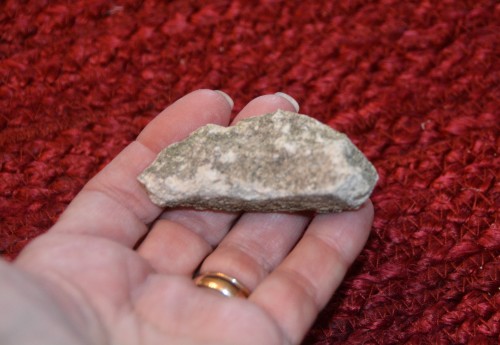 The day after Christmas, Donna, Ray and I visited Colonial Williamsburg. Thankfully, the weather was cool that day, because I was determined to wear my tartan scarf.

Thanks, again, Donna and Ray; you know how much your gifts mean to me. (Especially since I don’t know that I’ll ever be brave enough to fly across “the big pond”.)