Less than 36 hours after our family reunion ended, Motor Man and I were motoring north to upstate New York.  We were, once again, attending a gathering of Animal Adventure Park fans at the home of the famous April, the giraffe.

In case you aren’t April-obsessed (like some of us), here’s the scoop: April had another calf (Azizi) in March, and she and “Az” are now sharing barn and yard space with her 2 year old son, Taj. Meanwhile Dad Oliver has a new mate, Johari.

We arrived at the hotel late Monday afternoon and attended the Meet and Greet that evening. Funny story:  through a Facebook page devoted to the animal park, I “met” a fellow April lover, Carol, who lives in Virginia Beach. That’s about 45 minutes from where we live. Carol and I message on Facebook nearly every day, and have been planning to meet for lunch.  But that just hadn’t worked out.

So, we each drove 8 1/2 hours (her with her niece, and me with my Motor Man) to meet in person in Binghamton, New York. She’s just as much fun as I thought she’d be. 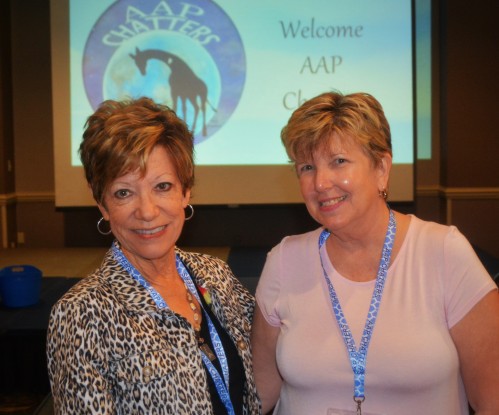 The following day, everyone headed to the park to see “our” giraffe family, as well as the other animals there.

April may be my favorite of the giraffes.

And not-so-little Taj. I was one of the millions who watched his birth live via the web cam.

Baby Azizi was in the distance, so we didn’t get a good picture of him.

But, we did see Dad Oliver, tongue out and just waiting for that carrot. 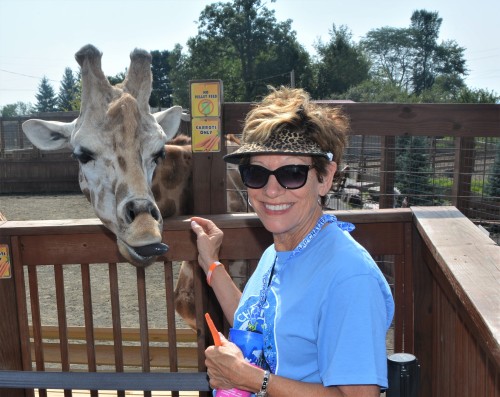 And this is Johari, fairly new to the park.  She arrived in February, just in time for Valentine’s Day.

That evening, we attended the dinner for the group.  There were upwards of 250 of us, and nearly everyone was dressed in something giraffe-related.

Motor Man took a picture of Jordan, the park owner, with two of the “Virginia” girls.

When Motor Man and I asked Jordan for a picture of us, he commented that he has the same giraffe shirt that Motor Man is wearing.

It was another wonderful time celebrating the animals (especially the giraffes!) at Animal Adventure Park.  Everyone comes away from the park with the same thought: that it is a very special place. The animals are healthy and well cared for, the property is clean as can be, and much thought is given to the comfort and enjoyment of the guests.

If you ever have the chance to visit, you shouldn’t pass up the opportunity. You, too, would become a giraffe fan.