Motor Man and I first met Jim back in the late 1990’s, when a mutual friend introduced us. Jim had been racing hydroplane (race boats) for many years, but had never won a race.  He asked Motor Man to start building his engines.

Motor Man and I began traveling to boat races from southeast Virginia to Maryland to Decatur, Illinois to New Jersey. Jim won many, many races and several championships in his 5-litre boat, E-43, which he named Keen’s Machine. There were a few tense post-race inspections , but no DQ’s (disqualifications). Motor Man does like living on the edge….

And during those years, Jim became more than a customer; he became a friend.  He sat with us at many local short-track (car) races, he came to our shop to work on his engine and/or boat and was there for Open House events we hosted.  He attended PRI (Performance Racing Industry) trade shows with us in Orlando and Indy.

Jim was at our wedding reception in 2002, and following the deaths in recent years of Motor Man’s parents, he visited to pay his respects.

He passed away Saturday morning.

At Motor Man’s and my wedding reception. Jim’s crew chief, Joe, on the left, and Jim on the right.

Joe,  Motor Man and me, Jim and his brother, Doug, following a boat race Jim won in Portsmouth, Va.

Jim and Joe at an Open House at our shop. This was 2004, and Jim won a  championship that year. 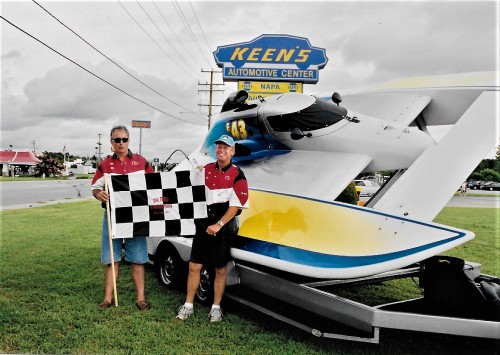 Relaxing at our shop with a fellow race boat owner. 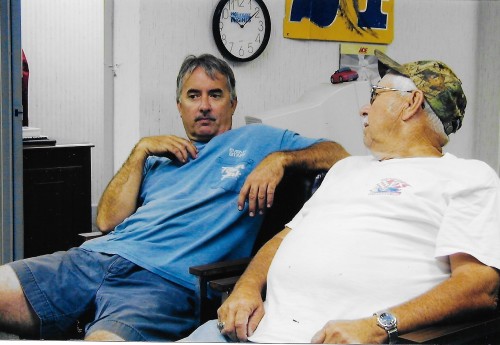 Dearborn, Michigan for the awards banquet in 2011.

And perhaps my favorite picture of Jim, taken in 2010. He won the high points title  that year.

In our office are several reminders of Jim’s accomplishments in boat racing. He graciously allowed us to display the checkered flag he received for his 2004 World Championship, won in Cambridge, Maryland. (Same flag that’s in the Open House photo above.) 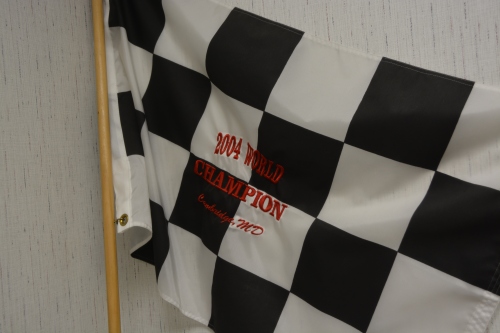 And in 2008, Motor Man had a clock made for Jim to commemorate one of his championships. (We also had one made for us.)

Thanks for all the memories, Jim. We’ll most likely attend more boat races in the future, but they won’t be quite the same.