As some of you may recall, Motor Man’s mother passed away in February, and in the following months, family members sorted through her belongings before her house was sold. This week, Motor Man and I were looking through some boxes that we were given and found a treasure: his baby book.

Neither one of us remembers ever seeing it before, nor his Mom mentioning it.  Just seeing that vintage book with the sweet illustrations was special, but then, I spotted this page. Under First Visitors: “Father – 1/2/45 – surprise arrived from Camp Hood, Texas at 10:30 a.m.”

Pop had been drafted and was in boot camp in Texas in the months before Motor Man was born.  Then, en route overseas to serve our country during World War II, Pop came home on a brief furlough. (We’d  always heard that he was actually AWOL. Now whether that was another visit, or if Motor Man’s mom was keeping things legit with the entry {below}, we don’t know.…)

With communications so limited during that era, Pop didn’t know that his son had just been born the afternoon before he arrived home.

Motor Man’s mom told us many times that she insisted on being released from the hospital the day after his birth, which was unheard of at that time. But being the  persistent woman that she was, the doctor relented. She and her newborn went home that very day, so her husband could have as much time as possible with his little family before going overseas.

I’ve always thought this was an amazing photo, but after seeing the baby book, it’s even more meaningful to us. 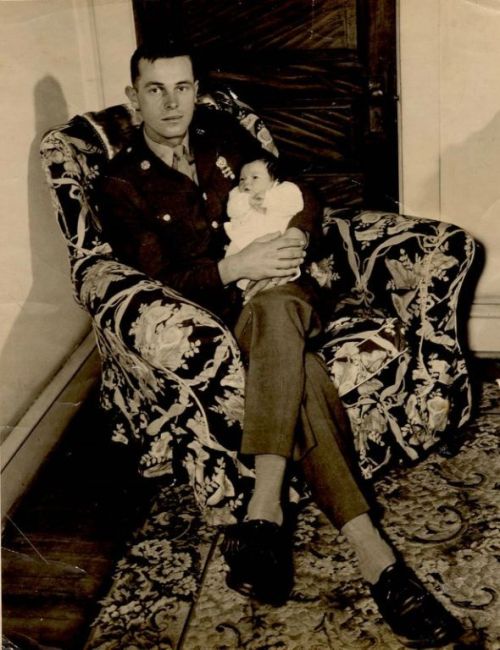 This was another entry in the book: “Jan. 2, ’45 day after arrival, your daddy came home on furlough for 7 days before leaving for overseas”.

It would be nearly eighteen months before Pop would be reunited with his wife and son, as evidenced by this entry: “Recognized father – returned from overseas May 16, 1946”. 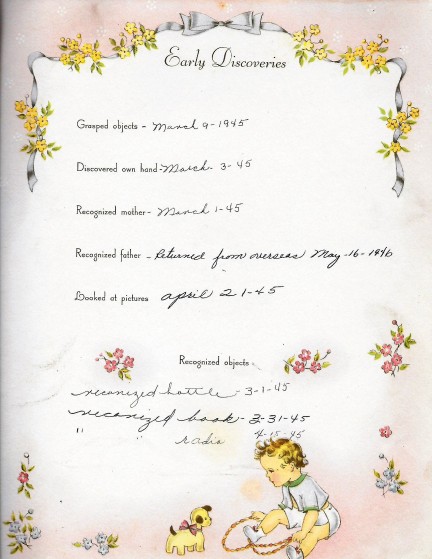 It’s impossible for my generation to grasp living in that era: this was an eighteen year old girl, married for less than two years, her young husband overseas fighting in a war, with a great likelihood that he would never return home….and she has a brand new baby.  Reading her written words in this book just emphasized all those facts that I already knew.

Thankfully, Pop did return home, and, in the following years, the two of them added three daughters to the family.  They celebrated their 73rd anniversary a few months prior to Pop’s passing in 2013.