On this Memorial Day, I’m sharing a story I saw on AOL Top News yesterday.

In 2010, Susan Wells, a New York woman, started a program called Stars For Our Troops. Stars from tattered and torn American flags are washed and pressed. The stars are then given to members of the military and veterans along with this note:

“I  am part of our American flag that has flown over a home in the  U.S.A. I can no longer fly. The sun and winds have caused me to  become tattered and torn. Please carry me as a reminder that you  are not forgotten.”

There’s some controversy as to whether or not it’s appropriate to cut the flag, but Susan’s program has gained support, and there are several “branches” of the program throughout the country.

I like this idea. Although I know that burning a torn flag is the proper way to dispose of it, I think it’s nice that part of the flag is being repurposed as a small token of thanks to the members of our military.  As my American flags must be “retired”, I plan to send them off to be used in this way.

Here’s the link to the web-site: 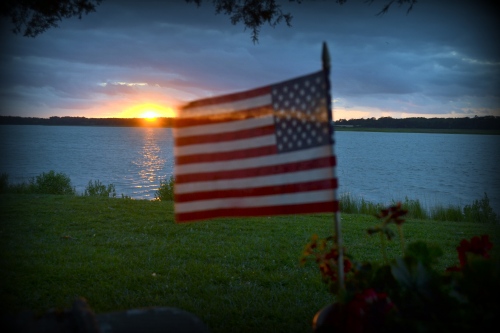 Marshall’s flag in the sunset photo

The American flag, Old Glory, standing tall and flying free over American  soil for 228 years is the symbol of our beloved country. It is recognized from near and afar, and many lives have been lost defending it.     ~ Jeff Miller