It’s been a little over a year since I shared this post about the 2017 Corolla Wild Horse Fund Calendar contest.

This was my third time participating in the contest, and as I had done in the past, I offered a little giveaway for my readers. I asked them to select which of the three photos I submitted they thought might have a chance to be chosen for the calendar.

To refresh your memory, here are the three pictures I submitted.  Photo # 1: 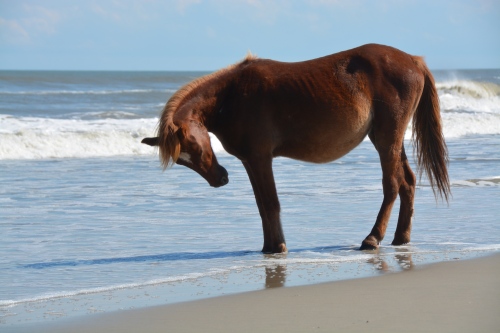 Last week, the Corolla Wild Horse Fund announced on Facebook that the calendars were back from the publisher and available for purchase at the museum in Corolla or by mail order. Motor Man and I just happened to be in the area last week, so we stopped at the museum. Since the winners hadn’t yet been announced, I stood at the gift shop counter and nervously opened one of the calendars. And had quite a surprise.

Not just one of my photos was in the calendar, but TWO.

Back at home, Sundae wonders what all the fuss is about…

So, I’ve had Motor Man randomly select two readers’ names, one from those who thought Picture # 1 had a chance, and another who chose Picture # 2. (Drum roll, please…...)

“Wishing Welsh”, who chose Picture # 1, was the name drawn as winner of one calendar. (Note: My nephew, Connor, also chose this picture, but I didn’t include his name in the drawing, because he’s a teenager, and I wasn’t sure he’d want a horse calendar.)

And “Lady Lisa Bear” is the winner of the other calendar because she chose Picture # 2. (Note: Marshall and my friend, Doris, also thought this was a winning photo. I didn’t include their names in the drawing, though, because they regularly receive calendars as gifts from me anyway.)

I am so honored to have my photos included in the Corolla calendar for the third consecutive year. And, as part of my acceptance “speech”, I must give credit to my driver, Motor Man: the most patient man I know. And at no time do I try his patience more than on our Corolla trips.  I’m constantly asking him to “stop here”, “pull up a few feet”, “can we turn around and go back for that picture?”, etc.

Thanks to everyone who participated in the contest.  The deadline for entries for the 2018 calendar is October 30, so I am in the process of deciding which photos I’ll submit. And, once I make my decision, I’ll have another contest for you to enter.

19 responses to “The Giveaway Winners (Finally)”