Today, Motor Man and I are celebrating our fifteenth anniversary. For an early celebration, he surprised me with an overnight trip last weekend. I’m sure it’s because he’s heard me say several times that our previous time there was like a “fairy tale”. So we returned to the Friesians Of Majesty farm in Vermont.

We stayed overnight in a cottage on the farm and went for a sleigh ride the following day. Our sleigh was pulled by these two beauties: that’s Ymkje at the forefront and Jelke to her left.  When Robert, the owner of the farm, took us on our sleigh ride, he told us that Ymkje was his first Friesian and that she actually started his love for the breed.  She’s 19 now and is a “model mare”, which means she’s among the best of the best.  He said she’s also one of the largest Friesian mares he’s ever seen. (The Friesian breed originated in the Netherlands, so they’re all given Dutch names.) 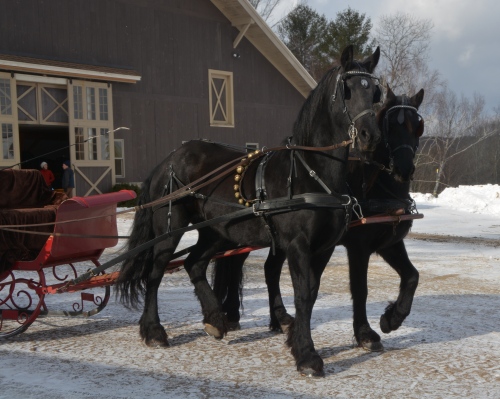 It was a beautiful day for a sleigh ride: sunny and chilly, but not frigid. Would you like to join us?

Imagine our surprise when we learned that Robert’s apprentice on the ride, Haley, is from Chesapeake.  That’s about 30 minutes from where we live.  We stopped a couple of times during our ride to allow the horses to rest. And to take a photo. 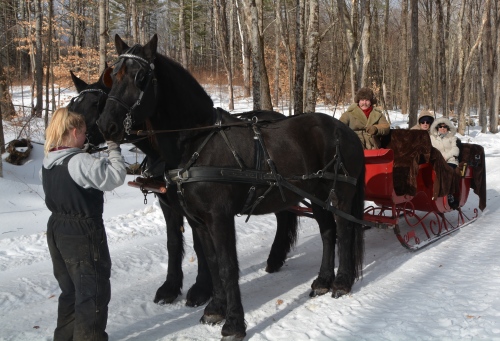 Four years ago when we were last at Friesians of Majesty, we met Othello, the number one Friesian stallion in the world.  The morning of our sleigh ride, Othello was outside, enjoying some fresh air. That’s him on the left; even sporting a horse blanket, he looks regal. 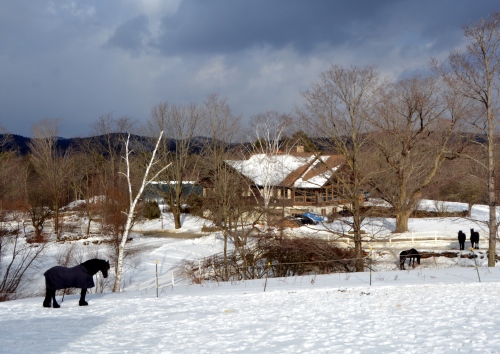 Once back from the sleigh ride, Motor Man decided that I needed a  pony ride. My instructor, Sherri, chose Gurbe as my horse for the lesson. Here I am, meeting him….that is one BIG horse.

Sherri spent quite a bit of time with me in the arena, giving me pointers and  saying that the next time we visit, I will trot.  I was too much of a coward to do anything other than let her lead me around the arena. The wind picked up, and Gurbe was a bit uneasy about it, so Sherri had me dismount earlier than we’d planned. It definitely wasn’t the most graceful thing I’ve ever done, but I “stuck the landing”, so that was a relief. 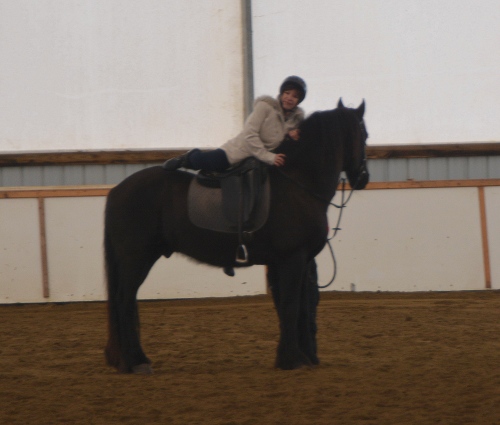 Thank you, Motor Man, for another fun trip to that magical place. 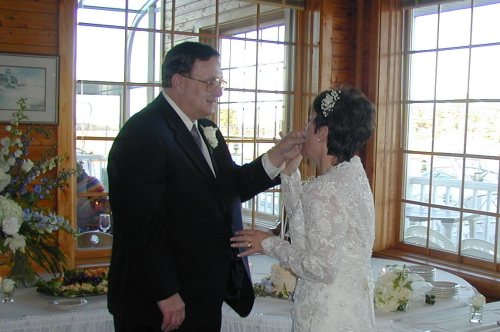 And here’s to many more celebrations of our special day.