Warning: May Not Be Suitable For All Viewers

Now, that I have your attention, I will specify: if you are squeamish about snakes, just exit this blog post now.

You may recall that I have done everything in my power to have blooms this year on my garden phlox. The deer usually mow them down once the foliage is a few inches tall.

This procedure has involved netting, fencing, zip ties and every garden stake I could round up. 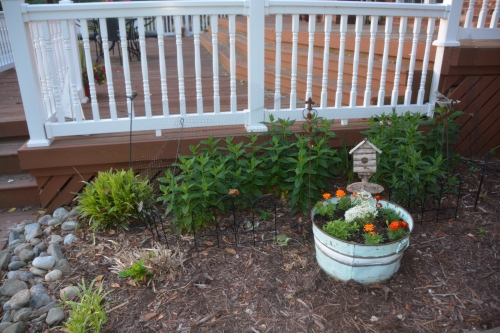 And it has worked perfectly to keep the deer away.

Monday evening, Motor Man and I were standing on the deck beside the railing in the above picture. I leaned over to point at the foliage, and he suddenly said: “Get back!”. 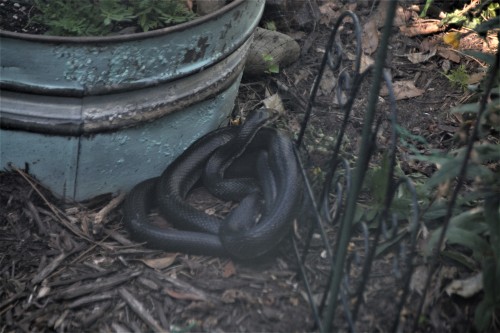 This one was entangled in the netting. Badly entangled.

And even though, he was a “good” snake, there was no way that Motor Man and I were going to even attempt to free him from that netting.  We just went right back in the house knowing that the next morning, he’d be gone….one way or the other.

But the next day, he was: still there, still entangled, and still alive.

Ed, a tree expert that Motor Man has known forever, had been in our yard earlier that day taking care of some tree work. So Motor Man called him, and Ed said he’d come take a look at the snake situation.  As it turns out, there was no saving the snake at that point, so Ed put him out of his misery and…..discarded him.

About 30 minutes later, I was in the kitchen and glanced out the window to see how much damage the snake had done to my deer barricade… and I could not believe what I saw.

Another black snake. Just as big. In the very same location. Entangled in the netting. Sheesh.

Another call to Ed, who thankfully was nearby.  He and his buddy, Mike, came right away. This snake hadn’t gotten as entangled as the first, so Mike went right to work to save him. He asked for a garbage bag so he could take him and release him FAR, FAR away. (To which Ed said: “You are NOT putting that snake in the cab of my truck….”)

I recorded the last part of the event (while Motor Man and I watched safely from the deck):

(The dog Motor Man was referring to in the video is Ed’s little pooch, who did keep his distance from the area.) I sent the video to Ed, and he called Motor Man, laughing.  And Motor Man and I laugh every time we watch it. So thanks to Ed and Mike for the snake removal. And you can bet that I’m watching every step I take in the yard ‘these days’. Because I. Do. Not. Do. Snakes.

This entry was posted in Days at Home and tagged black snake entangled in netting. Bookmark the permalink.

10 responses to “Warning: May Not Be Suitable For All Viewers”