The Little Brother I Never Had

He was born just a few months shy of my seventh birthday. During our childhood, he and his older-by-two-years sister spent a great deal of time at our house. So we grew up together. He was that annoying/loving/pest-of-a-little-brother that I never had. And he had beautiful brown eyes and the longest eyelashes.

You may recall that my two sisters were teenagers when I was born. Within a few years, they were both married and had children. And my nieces and nephews were more like siblings to me.

I’ve shared the sad story here many times of my sister, Rose, and her death at the age of 30 as a result of domestic violence.

That brings us to Steven, Rose’s son.

Steven was just nine years old when he lost his Mom.

This picture was taken at a family reunion a few months after that tragedy.

Steven lived with nearby relatives through his teens. This was another family reunion photo with his sister and their great-uncle, Thomas. Steven was 17.

A few years later, he moved to Florida. He experienced some difficult times, but we kept in touch with phone calls and letters.

This picture was taken two years ago of him with his new puppy, Kodi. 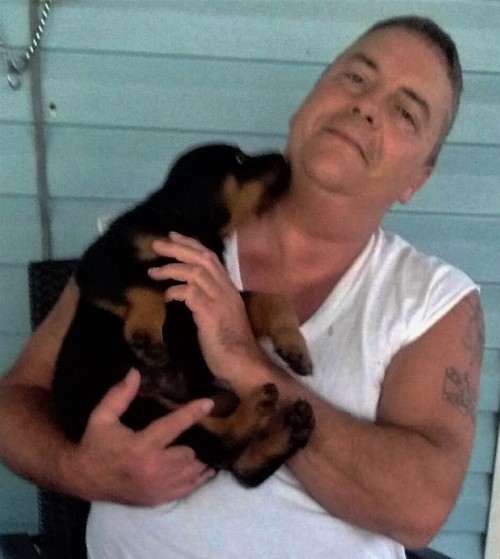 Over the past few months, life became more than Steven could bear. I got the call last week.

He closed every letter, every phone call, every voice message to me the same way:  “Love ya”.

….if only life hadn’t been so tragic for that little brown-eyed boy.