My Facebook friends know that our kitty, Sundae, paid a visit to the vet last week. Sundae had been experiencing some tummy issues, so last Friday, it was off to the doc.

Motor Man offered to go with us, but he’s up to his eyeballs in race engines (first race is a little over two weeks away), so I assured him that we would be fine.

Our previous kitty, Beezy, was such a gentle soul, when it came time to put her in the carrier, a tiny, encouraging shove was all that was needed.  Not so with Miss Sundae.  I have to put the carrier on its end and attempt to “drop” her in – feet first. It’s at that time that she seems to quickly grow ten extra hind legs, all going in different directions.

After about a half dozen tries, she was safely in the carrier and began to sing the song of her people.

When we arrived at the vet’s office, there were two huge dogs in the waiting area singing the song of THEIR people. At that point, Sundae decided to remain silent.  And, as upset as she was with me earlier, she nuzzled my hand through the door of the carrier while we waited. That’s forgiveness.

In the examining room, Sundae was as good as could be. We were left alone for a few minutes to await test results. So, we did what most folks do in those situations: we took selfies.

I stood close to the examining table and cradled her in my arms. And she never whimpered. 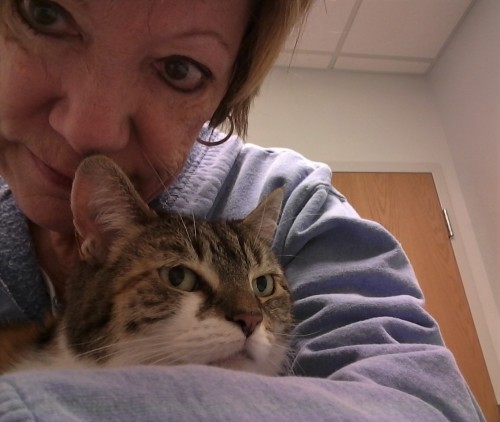 The vet’s diagnosis was a bacterial infection, and we were given a prescription for liquid meds. 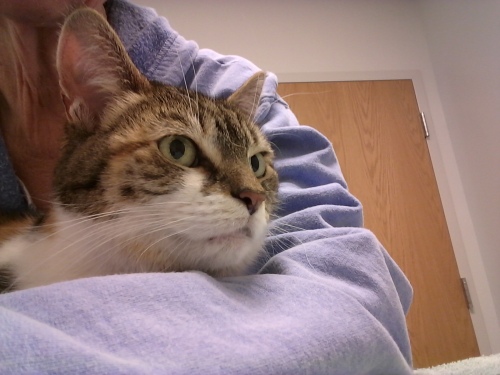 Now, if we only had a video of Motor Man and me actually trying to get those meds IN Sundae:  that would be interesting indeed. Two words: tag team.

And, as upset as she is when that takes place, a few minutes later, she comes back to us to be loved.