Sadness On The Beach

Over the weekend, the Corolla wild horse herd suffered a loss.

A mare ran headlong into an unmarked guy wire.  It is believed that she died quickly from her injuries.

She had given birth to a foal in March, the second-born of this season. The foal was given the name Rosie. What’s especially touching to Motor Man and me is that we saw Rosie and her Mom in April. When I took this picture, they were up near one of the sand dunes. It was close to sunset, so they had a little golden hour glow.

We saw them a short time later, and they were by the water’s edge. 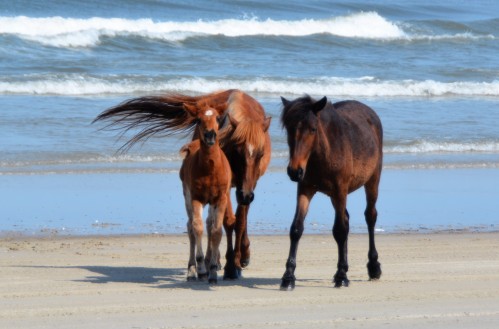 There have been a couple of  posts regarding this tragic incident on The Corolla Wild Horse Fund Facebook page. That is the organization who oversees the wild horse herd. They posted that  Rosie is old enough to survive without her mom. She’s been observed eating and drinking water, and the other mares in the harem are staying near her. At this time, there are  no plans to remove her from the beach, but they’re certainly keeping close check on her.

They also reported that the power company was notified, and on Monday, they immediately began marking the guy wires in the area that weren’t already marked. 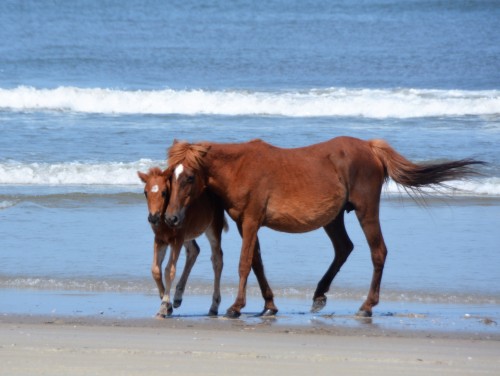 Run wild and free on the other side, beautiful Mama.  Your little Rosie is being watched over here by humans and horses alike.