Yesterday morning, I had an early appointment in Hampton. As I was walking back to my car after the appointment, I called Motor Man to let him know I was heading home. As soon as he said: “Hello?”, I asked him what was wrong.

He sputtered: “I almost cut off the end of my finger. I’m on my way to St. Luke’s!” (an urgent care facility about five miles from our shop). And yes, he was driving himself. Needless to say, the twenty minutes it took me to drive there from Hampton felt like two hours.

He had been working in our machine shop, setting up a cylinder head (which weighs about 60 pounds) to be surfaced. The jack under the head slipped, causing the head to fall on his hand.

We returned to the scene later in the day, and he demonstrated what happened. In this picture, he’s pushing back the cylinder head, which is attached to the machine. The head wasn’t this high up when it slipped, but his hand was caught between the head and that “ledge” where the wrench is. 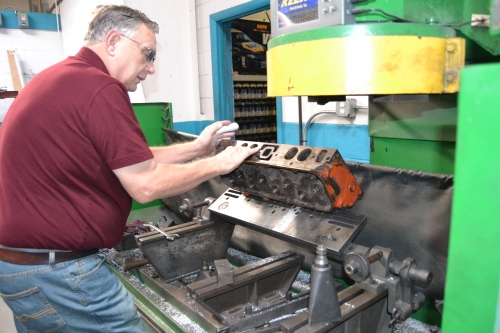 He has a tiny break in the bone at the tip of his finger, and a laceration which required four stitches.

Once we returned home, Nurse Sundae conducted a cat scan. 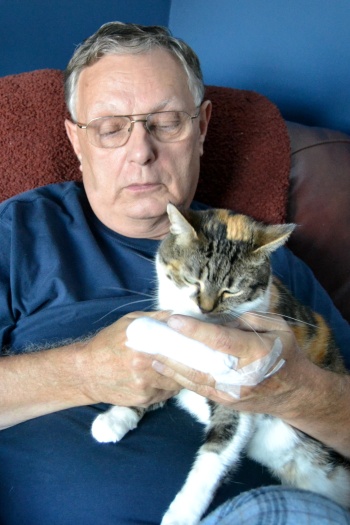 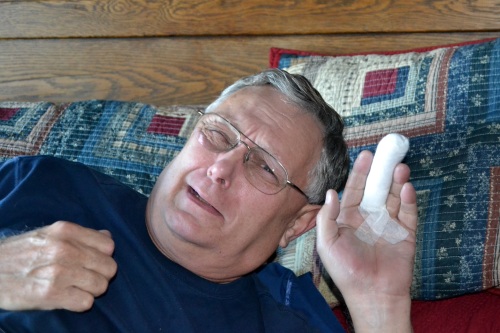 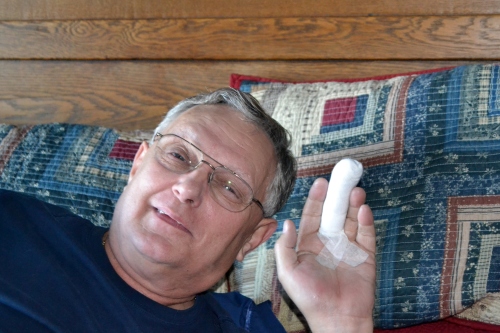 (What a guy: posing for blog pictures after the trauma of the day.)

Later today, he has an appointment with an orthopedic specialist regarding the broken bone, which, hopefully, won’t require surgery. We realize this could have been much worse, and we’re so thankful that it wasn’t.

Oh – and I did take a picture of his finger while we were at urgent care (with my cell phone), but I’ll spare you that image……