A couple of years ago, I received notification of a new comment on this blog post that I had written the previous year. The commenter’s name was Megan, and she had discovered the post while researching Smith’s Fort Plantation in Surry County.  Megan and I began communicating by email and soon learned that we are very distantly related.

In that post, I wrote that this property was purchased by Thomas Warren in the 1600’s from Thomas Rolfe, the son of Pocahontas and John Rolfe. And I just happened to mention that Thomas Warren was my 8th great grandfather.

Turns out, Thomas was Megan’s 10th great grandfather.  Megan and I became friends on Facebook, and she said that when she visited this area again, she would contact me so we could meet. (She lives in Ohio.)

We finally met in person on Wednesday. Megan, her mom, and her best friend were in the area visiting nearby Williamsburg. We decided to meet at (where else?) Smith’s Fort Plantation. We had our picture taken in front of a huge old magnolia tree. Hmm…wonder if it was there during Thomas’s time? 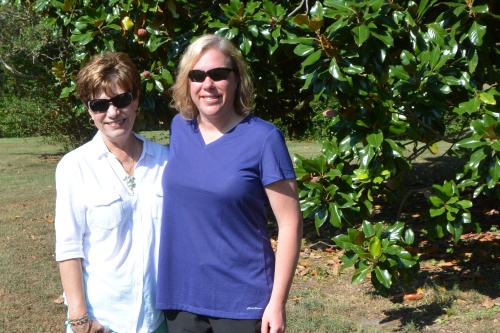 Smith’s Fort wasn’t open for tours on Wednesday, but while we stood out front, chatting, a car pulled in the drive. The driver was a man named Tom, and although I didn’t ask what his exact title was, I’m guessing he may be the site coordinator for Smith’s Fort. When he found out we were Warren descendants, he offered to show us the house.

What a great tour we had. And a special surprise: in one of the upstairs bedchambers, a King James Bible, printed in 1621, is on display. Megan’s mom, Linda, asked Tom if he would look  inside to see if the name John Bill was shown as the printer.  John Bill was one of Linda’s ancestors and was a printer for King James during that time period.  Tom checked for us, and sure enough, John Bill was the printer.

Here’s a close-up.  Just under the words  “Printed In London”, you can see the names Bonham Norton and John Bill.  And note the Roman Numerals for 1621.

My online research regarding the King’s Printing House returned this: “In the Jacobean period the King’s Printers were Robert Barker (1570–1645), and the two Shropshire men, Bonham Norton (1564–1635) and John Bill (1576–1630). At this time the office of the King’s Printer included the privilege to print the Bible and the Book of Common Prayer in English.“

Since Megan’s connection to Smith’s Fort was on her father’s side, we all thought it quite interesting to find the name of one of her mother’s ancestors in an artifact within the house.

After our tour, Tom graciously agreed to pose for a picture with Megan and me.

We left Smith’s Fort, and on our way to Smithfield for lunch, we stopped briefly at Bacon’s Castle, just because I can’t pass up a chance to share that special old house with those who’ve never been there. It, too, was closed that day, but we took photos of the exterior and I told them a little about the house and property. That’s Megan’s friend, Diana, on the right. 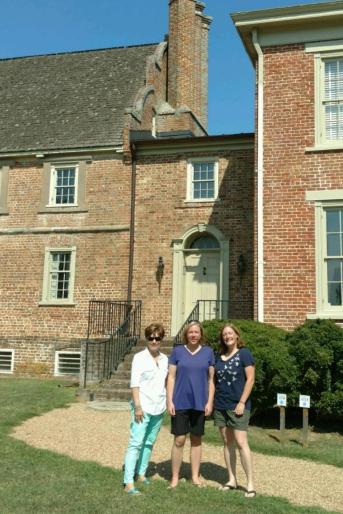 Our visit ended with lunch at Smithfield Station and a photo of the four of us. Linda, Megan’s mom,  is on the left.

(Last week,  I told Marshall that I was going to meet my “47th cousin, twenty times removed”.  Maybe one day, if we compare our genealogy notes, Megan and I can determine what our exact relationship is.)