The Calm After The Storm

In last Friday’s post, I shared that we were preparing for whatever effects of Hurricane Dorian happened to come our way.

Thankfully, we were spared.  We only had about an inch and a half of rain,  some gusty winds Thursday night and part of Friday, and a minimal high tide. To give you an idea, you’re just seeing the top of the marsh grass in this picture; the water is usually out past the grass.  And our old boat and cedar tree survived just fine. We’ve seen MUCH worse. 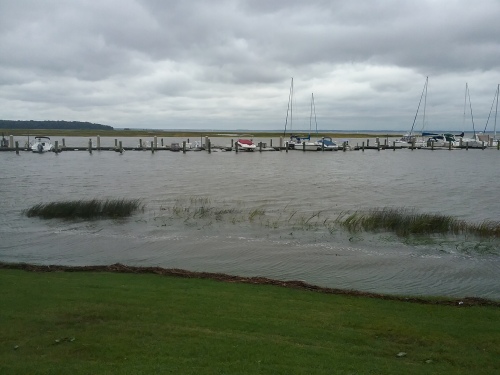 Friday evening, the storm was over, and we had a gorgeous sunset.

Hardest hit by Dorian was the area including Ocracoke and Hatteras, NC. Ocracoke is about 150 miles south of us, as the crow flies, and  miles south of the Carova area, home to “my” wild horses. The Carova area got quite a bit of rainfall and some storm damage. But, thankfully, no loss of life in the Outer Banks. And the horses are fine.

As is usually the case following a storm, our weather over the weekend was beautiful.

And, once again, we went hot air balloon chasing both Saturday and Sunday mornings. (*Chasing the balloon refers to being there for the launch,  watching as much of the flight as you can, then going to the landing site {wherever that may be} to help retrieve the balloon, pilot and passengers. Some pilots use cell phones to let their crew know where they’re landing, some have two-way radios. Motor Man and I don’t drive the chase vehicle, but we usually try to help out if we’re needed.)  Saturday morning, two balloons launched from the same area at the same time.  Keeping up with two is quite a challenge. Although they launched from the same site, they didn’t land at the same location.

This gives you an idea of balloon chasing: you drive over a rise in the highway, heading in the direction you think the balloon should be….and there it is. 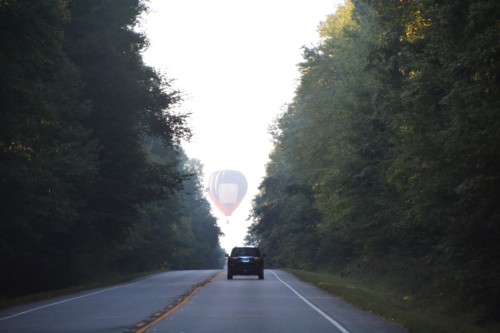 One of the balloons landed in Windsor Castle Park in our little town of Smithfield. A cross country team from a nearby college was at the park that morning, and cheered at the smooth landing. That’s historic Windsor Castle in the background, home of Arthur Smith, founder of Smithfield.

Sunday, there was only one balloon flight, but what a perfect morning. The pilots enjoy flying over our many tributaries. And I enjoy catching pictures of the reflections.

They flew over Smithfield Station Restaurant/Hotel/Marina. The structure in this picture is part of that establishment and is known as “The Lighthouse”. It’s a replica of The Hooper Strait Lighthouse in Maryland. 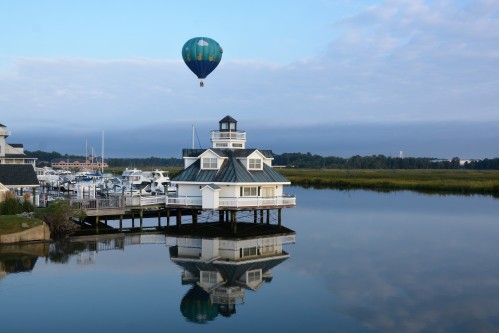 This flight took the passengers out in the country on a quiet Sunday morning. 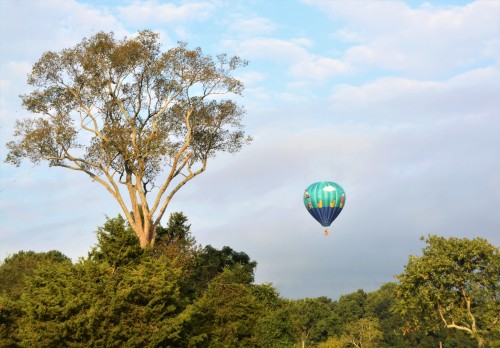 And, once again, they enjoyed a smooth landing. After the flight, the crew,  passengers and Motor Man and I returned to Smithfield Station for brunch and to discuss their flight.

With the flooding in Carova and the condition of the roads in that area, we’re not sure when we’ll get back there to see the wild horses. So in the meantime….we’re content to chase balloons.

7 responses to “The Calm After The Storm”