As most of you know, my hubby, Motor Man, builds high performance engines for race cars and race boats. He was tinkering with engines even before he was in his teens.

Thankfully, I became interested in racing when I was in MY teens (several years before the two of us would meet, and probably thirty years before he and I would be together).

So the majority of our friends and acquaintances are folks we’ve met through racing.

And one of the nicest of them all is our friend, Bruce.  Bruce used to race at our local short track many years ago. When he stopped racing, he began helping various teams, many of whom have been our engine customers.

And…. like us, Bruce LOVES kitties. He always pays lots of attention to Gypsy when he’s at our shop.

For several years, Bruce has worked with a very busy race team. They’re based locally, and race not only at our local short track, but also all over the world with another division of their team.   One aspect of Bruce’s job is to drive that huge car hauler.

Last week, Bruce and the team were in Laguna Seca, California.  He posted this picture on Facebook, and wrote:  “Very interesting morning here. Heard a meowing from under my trailer. Had to crawl under and found this poor thing hiding up in the axle area.” 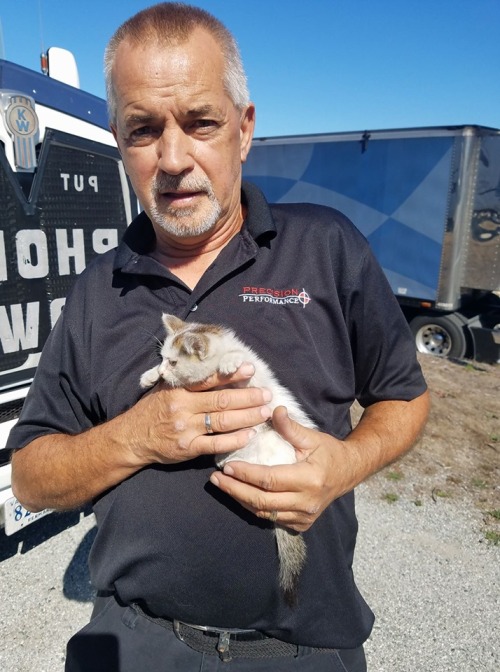 Of course, Bruce has no idea where, when or how the kitty came to be under the hauler…. it could have been at a rest stop?  Or there at the track? How frightening for her if she rode under the hauler for miles.

Within a day or two, this little kitty had been given the name “Axle”, and Bruce posted that she would be going home with him. Of course, I commented how wonderful it is that he rescued her. Just to show you what kinda guy Bruce is, this was his response: ” I believe God put her there for me to save her.”

AND, Rick, the owner of the team posted this: “We did some great things in Laguna Seca, but saving this kitten that hitched a ride under the hauler was the biggest win! Not sure what rest stop the momma probably put her in the axle area but she was a half dead greasy, dirty, fluff ball when Bruce heard her crying and pulled her out after arriving at the track.”

Not that they need it, but purrhaps Axle brought the team some good luck. Rick allowed me to share this picture.

Bruce and Axle are back on the road, and  their Facebook friends are being treated to photo and video updates  each day.

As Bruce wrote: “Life is much better riding in the truck instead of under the trailer.”  Miss Axle has her own little “on the road apartment”. 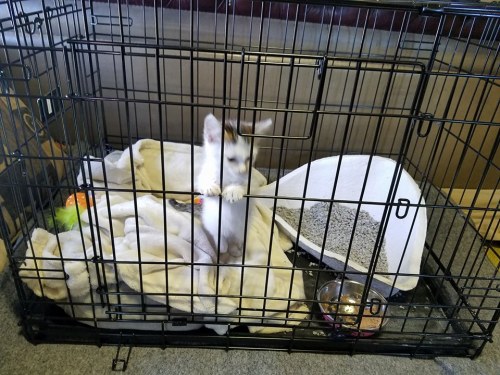 But,  sometimes, little kitties, like race cars “spin out”:

Thanks, Bruce,  for letting me share your pictures, and once again, I think you are a hero for saving this sweet little baby.

This entry was posted in Racing and tagged race car hauler driver saves kitten found on axle. Bookmark the permalink.