Saturday, a powerboat club from Richmond (VA) had their James River Fun Run. It’s been a few years since there’s  been one (to our knowledge). In the past, they were known as Poker Runs, but this year, it was dubbed the Fun Run.

The boats leave a marina near Hopewell mid-morning and travel down the James River, coming by our house on their way into the town of  Smithfield for lunch at Smithfield Station. Then, we watch as they head back out to the river and on to their next destination.

In the past, we’ve had a little gathering of friends on ‘poker run’ days. The weather forecast for Saturday had been for rain  (an 85% chance), so Motor Man and I didn’t plan anything this year. Saturday morning, the weather was beautiful: low humidity, a slight breeze and cooler temps than we’d had recently. So our friend, Paul, joined us to watch the boats.

As we were waiting, we noticed dolphins in the river. Guess they were the ‘opening act’:

I was amazed to get pics as nice as these. Dolphins are notoriously difficult to photograph; at least that’s been my experience.

Soon we saw roostertails out in the river and could hear the rumbling of the powerboats as they were heading our way.

We had the perfect place to watch from our ‘point’.

Our friend, Shannon, along with family and friends, was in the area in his beautifully restored Chesapeake Bay Deadrise  workboat, Rainbow Chaser. It’s always fun to see him going by with his Virginia and American flags flying. 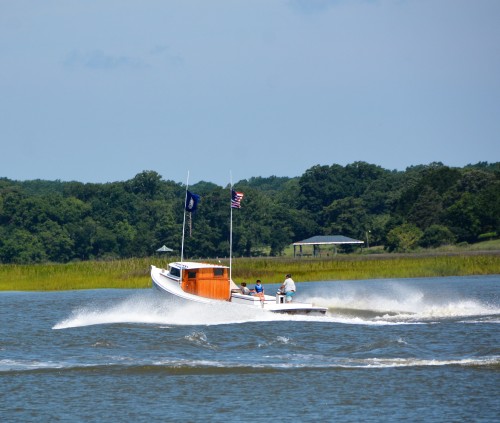 Colorful and fast Donzis, Fountains, Cigarettes, Scarabs and other makes put on quite the show.

Motor Man and Paul discussed all the horsepower (and fuel usage) as the boats passed by.

We were surprised at this powerful party barge:

We estimated there to be between 50 and 60 boats*, and once they all had gone by, we left to have a quick lunch.  When we got home, the boats were heading back to the river.

It’s always fun to watch when those boats come into town. We’re already looking forward to next year.

*The official count was 77 boats.