The Tide Is High

To begin this post, let me say that the tidal flooding we had in our yard this week was what meteorologists refer to as “nuisance flooding”. Yesterday, Motor Man and I listened online for several hours to emergency services frequencies in Columbia, South Carolina.  A firefighter was swept away by flood waters and clung to a tree for nearly two hours before he was rescued. A Blackhawk helicopter was brought in to rescue residents from their homes, because the streets were impassable. So, what we experienced in the way of flooding was nothing.  Some of those folks have lost all their belongings and their homes, and quite possibly, family members or neighbors.  The only inconvenience to us is what we’ll pay to have all this tide debris removed from our yard.

But, it does make for interesting photos.  I’ve attempted to find some before shots to give you a comparison.

This photo (taken from our balcony on a normal day) is of a crape myrtle tree just outside our kitchen window. 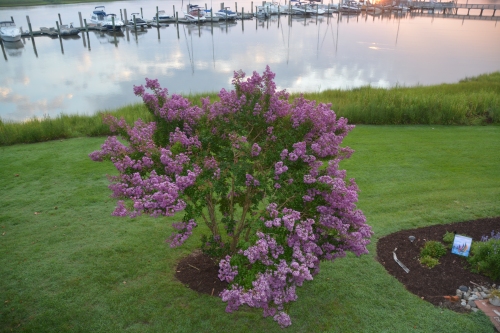 And this next picture was taken yesterday at high tide from the same location. The worst flooding we’ve had was during Hurricane Isabel in 2003, when the water came up higher than the base of the tree. (The 100-year flood plane levels for our area were revised after Isabel.)

This is the breakwater at the marina in front of our house – again, taken on a normal day.

And yesterday – at high tide. 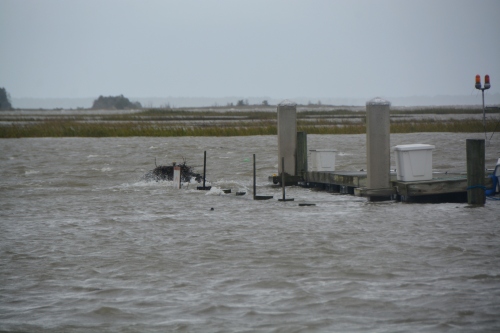 A picture taken from our balcony a couple of years ago. 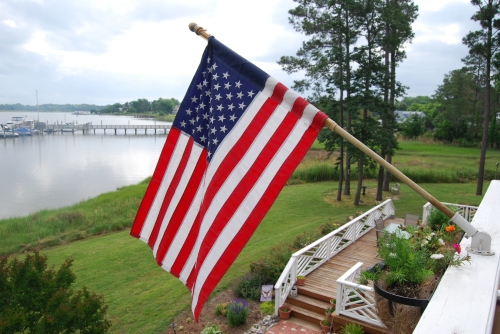 And those same trees in the background in this picture from yesterday. (We’ve also had new railings installed since the before picture was taken.)

This photo shows the “other” side of our yard from where I  take pictures of the sunsets and the old boat.  (By the way, the old boat is fine: the tide wasn’t high enough to affect her.) In the background is a little inlet, which is normally marsh and not filled with water.

An old picture of the little fence in that area, decorated for Christmas .

And one taken yesterday.

This shows our “front” yard, the side facing the river. I took this a few years ago during morning’s golden hour. 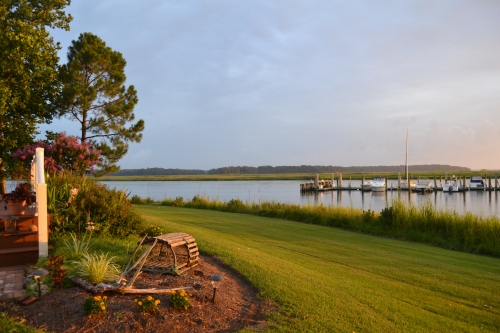 And yesterday, when there was no golden hour.

During a break from the rain yesterday, I took this little video of the waves “crashing” in our yard.

This morning, once again, we have wind and rain, and the forecast is for minor flooding during the next two tide cycles. And we’re hoping to see the sun by Wednesday.

Again, we are so thankful the hurricane didn’t actually come ashore anywhere in the U.S. We’ll be thinking of our neighbors to the south as they recover from the devastation from this storm.

This entry was posted in Days at Home and tagged flooding from hurricane joaquin, pagan river flooding. Bookmark the permalink.

17 responses to “The Tide Is High”