Fun, With A Touch Of Bittersweet

Friday, I left you with two cliffhangers, one being whether or not my friend, Donna and I would dress up for the Halloween Farmers Market on Saturday. (The other is the Corolla Wild Horse Fund Calendar contest, which I’ll write about on Friday.)

The answer to the question of us dressing up is: “sort of”.  I wore a witch’s hat ($6.00 at Target), but Donna was a bit more festive with her spider eye tattoo and necklace  and her Halloween shirt.  Since the pointy part of my hat didn’t show, I  looked more like a hillbilly.  A hillbilly wearing an autumn scarf. 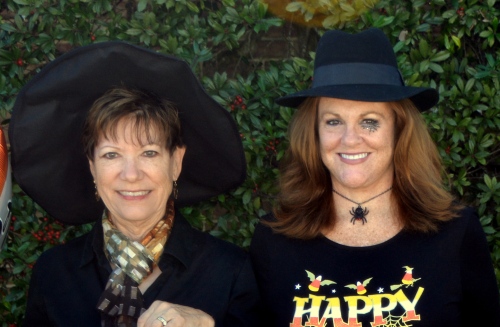 Now to change gears a bit to share with you something that happened at the Farmers Market.

One of the first booths we stopped at when we arrived at the market was the “Simply Kalina” jewelry booth.  It was our first experience with this lovely couple. As we were oohing and aahing over their beautiful jewelry made from vintage silverware, a pendant caught Donna’s eye.  The scene on it was so touching, she wanted me to see it and handed it to me.

Then I asked the jewelry designer where she got that picture. She said that a customer had asked them to make the pendant as a gift. 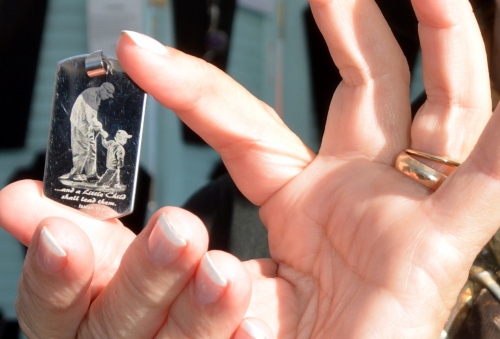 I said: “That’s my late father-in-law and my great nephew.”  This is the photo that was inscribed on the pendant.

As it turns out, the parents of Josey (the little boy in the photo) had the pendant made as a Mother’s Day gift for his grandmother.  (The one we saw Saturday was just a sample showing some of the work that is available.)

We were amazed that, of all the jewelry in the booth, that pendant in particular caught Donna’s eye, and the designer was surprised that I immediately recognized the photo.  I must admit, it was a touching moment for me, as well as for Motor Man when I shared the story with him later.

Following the market, Motor Man joined us for lunch. Then the three of us visited a nearby farm market/pumpkin patch, not for pumpkins, but rather for their delicious pumpkin ice cream.

And a photo op for the scarf-wearing hillbilly and her hubby.