Many of you will remember my previous mentions here of a young man named Matthew. A quick refresher: my late sister, June, was a member of an online knitting forum and became fond of many of the others in the group, one of those being a sweet lady named Mary.  Matthew is Mary’s son.  He is an amazing artist and a few years ago, asked permission to sketch from my photos that June shared through my blog and my Facebook page.  Oh, and Matthew is autistic.

Mary and I became Facebook friends through June, and Mary learned that Motor Man and I usually attend a yearly racing industry trade show in Indianapolis. She asked that I let her know the next time we planned to be in that area, and she would drive there so we could meet.

That happened last Thursday on a cold, windy, snowy morning.  We met at Connor Prairie, a settlement museum just outside of Indy.  My first thought was of June and how pleased she would be that we actually met in person. In fact, silly me was a little teary-eyed.

Matthew brought a couple of his framed sketches to show me, because snapshots just don’t do them justice. This is a sketch based on one of my wild horse photos.

Mary had previously given me a few pointers on interacting with Matthew, since I don’t know anyone affected by autism. She asked me to convey to you that Matthew’s lack of a smile doesn’t mean that he isn’t happy.

We exchanged gifts. I took Matthew a painted rock (a horse), some treasures that I found while beach combing and some cotton from a field, since I knew that wasn’t a crop grown in his home state of Michigan. (Not a flattering pic of me, but I love the candidness of us talking about the cotton.) 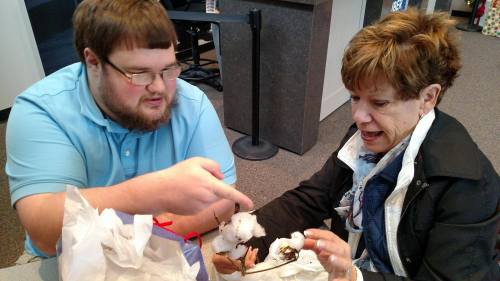 Matthew gave me my choice of a beautiful ceramic shark or a pottery bowl, both of which he had made. I liked them both, and chose the bowl.  Mary brought me several things. One is a sweet handpainted (by a friend of hers) magnet with a scene of the sunrise by the ocean. It was in that beautiful origami box that Mary made. There was also a cute little mouse ornament, an assortment of dish towels and a hand knitted (by Mary) hanger to attach them to a cabinet or oven door.  The light blue square object under the towel is a hand-knitted “scrubby” for dishes. I didn’t realize that there’s now a special yarn to make scrubbies.

The three of us enjoyed walking through the museum, although the outdoor activities were closed for the season.

And we had a little fun in the gift shop. No, I didn’t buy the hat, but those warm cranberry-colored mittens were impossible to resist, and I added that Connor Prairie mug to my collection. 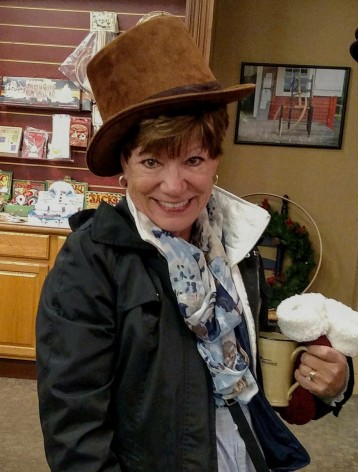 We posed for pictures in the beautifully decorated lobby before enjoying lunch at a nearby restaurant.   Then Mary graciously offered to drive me back to the hotel in downtown Indy, saving me cab fare. 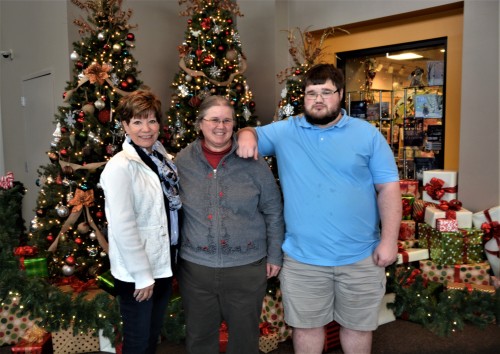 Oh, and by the way, Mary drove over three hours each way from their home just to make this meeting happen. I am so humbled that she and Matthew went to that extreme.  And I know June was smiling the entire time.

And, just a little coincidence: tomorrow would be June’s birthday.