Our weekend adventure was to….Chincoteague! You may recall that we took a quick Sunday afternoon trip there a few weeks ago for our weekly adventure with Motor Mum.

This time,  it was a weekend trip for Motor Man and me, and my friend/classmate from school, Donna, accompanied us. Saturday, we took one of the many Chincoteague boat tours. The weather was nice, but a little chilly on the water.

The three of us posed for a photo before the tour began.

Although we learned a lot about Chincoteague from our capable Captain (Bill), Donna and I were mainly interested in the wild ponies. We certainly got lucky in seeing them on this trip.

Just a little information: there are approximately 150 ponies (they’re too short to be called horses) living on Assateague Island. They’re owned by the Chincoteague Fire Department, and in July of each year (since 1925), they’re rounded up by the fireman (called Saltwater Cowboys). The ponies swim the short distance from Assateague Island to Chincoteague Island, where all the foals born that year are auctioned.  A few are pre-selected to be returned back to the Island. Those are called “buybacks”, and the highest bidders of the buyback ponies are given certificates of ownership, and allowed to name their ponies, which will then live out their lives on Assateague Island.

This site will give you more information on the history of the ponies. 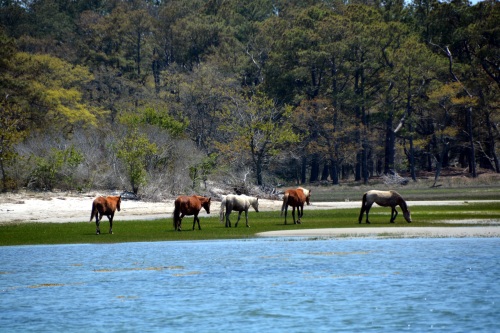 We weren’t nearly this close (so thankful for a zoom lens.) 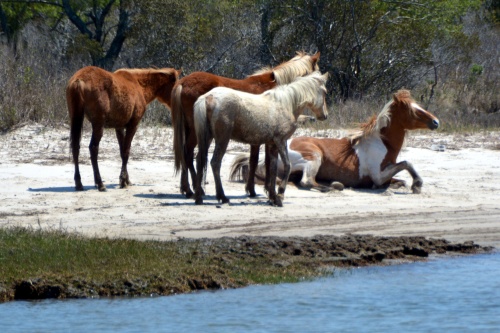 I’m trying to refrain from posting too many pony pictures.  But, really, can you ever have too many pictures of ponies?

Not as far as Donna and I are concerned. 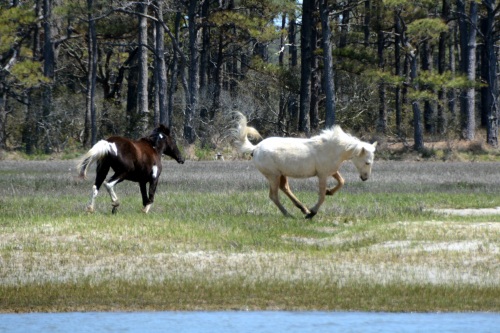 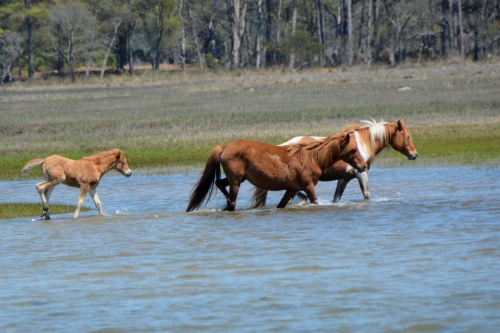 When we returned from our boat tour, we had dinner and settled in at the waterfront Hampton Inn. Motor Man watched our local race via the internet in our room, and Donna and I had a brief pajama party, complete with facial masks, Elvis on TV and lots of schoolgirl giggles in hers.

Our rooms were perfectly located to see the sunset from our respective balconies.

Such an amazing day. Could we possibly “top” this on Sunday? Tune in tomorrow!