1.) As we were leaving home recently, we noticed this deer having our neighbor’s  begonias for dinner.  Motor Man took this picture, since the deer was on his side of the vehicle.  I cropped it in order to show the deer better.  They’re pretty creatures, but  they do wreak havoc on our plants.

2.) Another deer story: Motor Man and I sat down to dinner Tuesday evening (yes, friends, we DO eat at home occasionally), and noticed a deer just a foot or two from our kitchen window, dining on a hanging petunia. They’ve also been eating the blooms on my phlox in that same area. And yesterday morning, I saw that they’d destroyed my mandevilla that USED to be on that white obelisk in the corner.  So I “constructed a fence”; yeah, we’ll see how much that helps. Obviously, they have now acquired a taste for Liquid Fence. (Update: after erecting the fence, I actually caught a deer RED-HANDED in the forbidden area. Andthe phlox? Nearly demolished. And I know I heard him laughing at my fence design.)

3.) Less destructive is my little herd of ducks.  Earlier this week, I was neglectful and had actually backed out of the driveway without feeding them breakfast.  They quickly came from their normal feeding location in the side yard to flag me down as I was leaving. 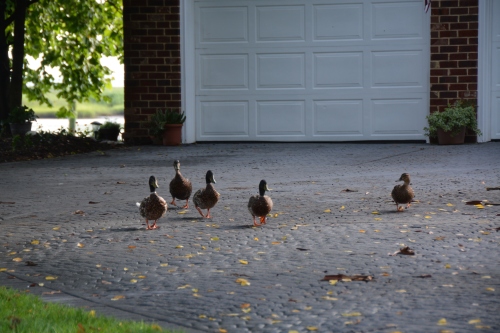 4.) Not quite wildlife, but some of you may be ready for a Gypsy update.  Most mornings, when Motor Man gets to the shop, Gypsy  demands attention.  She sits between him and his computer monitor until he reclines in the chair, so she can lie on his chest. (Please excuse Motor Man’s filing system there on the wall.) 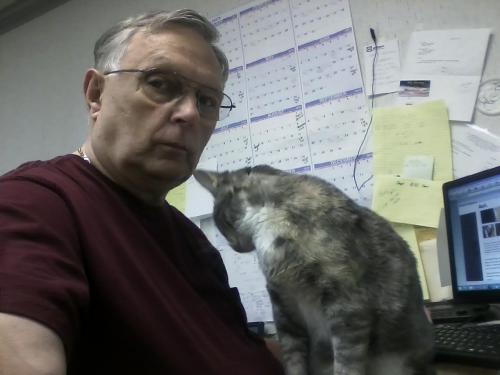 5.) And an update on Guillermo/William, the tiny foal that was once one of the wild horses of Corolla. (Now that he’s been in the care of humans, he will be adopted rather than returned to the herd.)  I’ve shared this video with my Facebook friends, but thought it might bring a smile to others as well. So happy that little William is enjoying life.