If there’s one thing we’ve learned in all our travels to the Carova area of the Outer Banks of North Carolina, it is that the beach is different each time.

Sometimes the sand is so smooth, it feels as though we’re driving on the interstate.  Other times, the ride is so rough, it “rattles our fillings”.  The width of the beach depends, of course, on the tide.

In this picture, taken last month, you can see the cottage named “Laughing Gull” in the distance. It’s the one nearest the ocean.  You can tell that the beach is wide enough for vehicles to park in the middle, and there’s room on the dune side as well as the ocean side for at least two lanes of traffic to pass.  The little boy is walking across what is considered to be the highway.

On our most recent trip to the beach (last week), the beach showed the effects of a tropical storm off the coast. There was barely enough room between the cottage and the tide for one lane of traffic. In all honesty, normally, the beach in front of Laughing Gull isn’t quite as wide as it is in the area where I took the previous picture. But, usually, there’s plenty of room for two lanes of traffic between the cottage and the ocean.

The horses aren’t bothered by a storm off the coast. The rough surf just makes for a pretty background for photos. 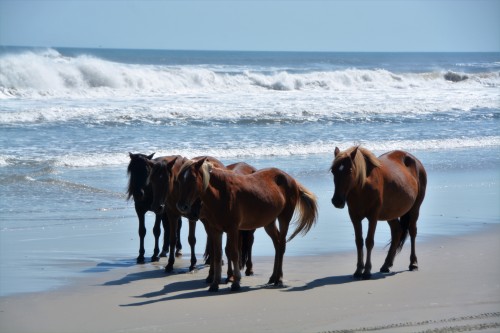 And on a lighter note, can you imagine stepping outside your door to find a horse under your car port?

So the condition of the beach isn’t the only thing that changes with each trip: we also never know where we’ll spot a horse.

9 responses to “Different Every Time”