To my mother, this was a “high geranium”.

And when I was a child, they were “high geraniums” to me too. I wonder how old I was when I learned that the actual name was hydrangea?   I wonder if I ever told Mom the real name? Evidently not, because I don’t remember her ever calling them anything but high geraniums. The photo above was taken a couple of days ago at Motor Man’s parents’ house. They have several beautiful blue hydrangeas.

This next photo was taken at Bacon’s Castle.  If you look carefully, you’ll see that there are actually pink and blue blooms on the same shrub. We’ve been told that the reason for two colors on the same plant has something to do with the lime in the old bricks of the nearby house.

One memory I have of blue hydrangeas, back when they were still “high geraniums”, was of the one growing beside our front porch steps of my childhood home. Those brilliant blue flowers meant summertime: playing on the porch in the early morning sun, going barefoot in the front yard grass, swinging on the porch swing, and best of all, no school. My sister told me that one very dry summer when she was a teenager, she hauled water by the pail to that hydrangea to keep it alive.

Another blue hydrangea memory happened one summer night in a country church in a neighboring county. Our junior choir, of which I was a member, was there for a revival service.  This was before churches, especially small country ones, had air conditioning. Most likely, it was sometime in August and it was unbearably hot.  I seem to recall the Baptist preacher being especially long-winded this particular night. The flowers at the front of the church were blue hydrangeas. I thought they were the coolest, most refreshing shade of blue I’d ever seen. Looking at them may have helped me survive that church service.

Marshall knows that blue hydrangeas are special to me, so a few years ago, he gave me one for Easter. But, because of our soil, each year when it blooms, it’s pink. Maybe one day, I’ll do some research to determine what nutrients I can add to the soil to change the blooms back to their original blue. 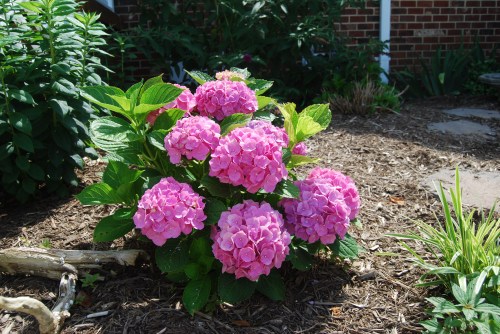 But even though blue is my favorite,  I have to admit this is one pretty little pink  high geranium.