My Family At Bacon’s Castle

Due to popular demand (from a couple of my readers), today’s post is about how my Mom and her family came to live in Bacon’s Castle in the 1920’s and 1930’s.

First, a little history about the house.  Everyone from the little town of Bacon’s Castle refers to Bacon’s Castle (the house) as “The Castle House”. It was built by an Englishman, Arthur Allen, in 1665. It’s not known how he came to be wealthy enough to build such an elaborate house in the Virginia countryside at that time.

It was originally referred to as “Allen’s Brick House”, but since being briefly overtaken by supporters of Nathaniel Bacon and used as a fortress during Bacon’s Rebellion in 1676, it has been known as Bacon’s Castle.  Bacon, most likely, was never even on the property.

The house was owned by relatively few families through the years. The Warren family owned it for three generations, beginning in 1876.  They were related to my maternal grandmother, who was also a Warren.

The Warren family was one of the wealthiest in our area. My granddad, on the other hand, was a sharecropper. He and my grandma were parents to eleven children at the time he was asked by the Warrens to farm the land at Bacon’s Castle.

Prior to moving into the Castle House, my mom and her family had moved many times. She told me that Grandaddy was a good farmer, and other landowners were constantly making better offers to attempt to lure him to farm their land.

Once they moved into Bacon’s Castle, they remained there for nearly twenty years. Their youngest child, Sarah, was born in the Castle House. Aunt Sarah passed away two years ago, but she was always proud to have been born in that historic house.

During the time my family lived there, the front of the house sported a double-decker wooden front porch. My mom said there was no door to the porch from the second story, but the children would climb through a window and sleep out on the porch during the summer.  This photo has been in our family for years, but I’m not sure of its origin. The 1665 portion of the house really isn’t visible in this picture; it’s hidden from view by the huge tree on the left.

And here’s my Aunt Lucille in front of the house, sitting in an Adirondack chair, most likely made by my daddy. (Aunt Lucille was always a snappy dresser.)

I’ve always loved this picture of my Mom and Grandma with my sisters. Maybe they were enjoying watermelon on a hot summer day?

I’m sure I was probably told why the family moved from the Castle House after all those years, but I don’t recall the reason. And sadly, I don’t think there’s anyone left that I can ask.

There’s much more family history relating to the Castle House, and I may share some of that from time to time. What I’m unable to put into words is the feeling that comes over me when I step foot on the land there. It’s a feeling that’s shared by my son, my sister, my nieces, and most likely, many of my cousins.  Even though none of us actually lived in the Castle House, the presence there of our family is so very strong.

I think the word that comes closest to describing it is….home. 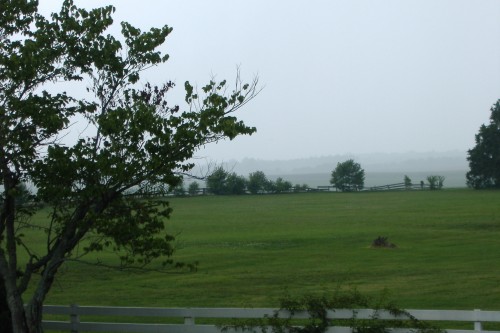 fog over the Castle farmland (photo taken by Marshall)

Bacon’s Castle has been owned by Preservation Virginia since 1973, following the death of W.P. Warren. It is temporarily closed to the public.

Update: Bacon’s Castle is once again open to the public; hours are seasonal.

32 responses to “My Family At Bacon’s Castle”