In February, 1989, my mother was staying with us, while she was recuperating from an illness.  One day she looked out at the clouds, and announced: “Papa used to call that a snow bank.  We’re going to get a heavy snow.”

Later that day, it started snowing.  When it stopped, we had over 15 inches.

My Granddaddy was a farmer, and was probably better at predicting the weather than our modern day meteorologists with their super duper triple dopplar gadgetry.

This past Saturday, I happened to notice this. 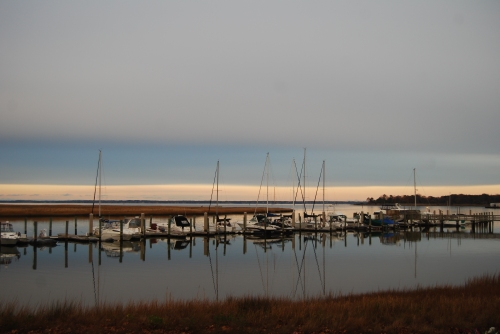 Is that……could it possibly be…..a snow bank?  After all, the meteorologists with their super duper triple dopplar gadgetry were predicting some snow for us that night.

Sunday morning, this was our snowfall.

In case you missed it, here’s another view.

Obviously that wasn’t a snow bank.

And obviously, I’m not as good at predicting the weather as my Mom and Granddaddy.

But I may be on par with the meteorologists.