My earliest summertime memories include the annual family “weinie roast” at my uncle’s farm.

Everyone brought coat hangers, and we really did roast hot dogs over an open fire. Uncle Andrew pulled an old farm wagon up in the yard, the food was placed on the wagon, and we all gathered around.

My eager anticipation for this event probably had less to do with the food, and more to do with the fact that Uncle Andrew’s daughter, Nell, had horses. She would always let us children (one at a time, of course) sit on one of the horses and lead us around the barnyard. I can still remember what a thrill that was.

Looking through my pictures recently, I found this one of my late sister, Rose. This was taken in 1955; Rose would have been 17.  I spoke with Nell on the phone recently, and she reminded me that the horse’s name was Topsy. 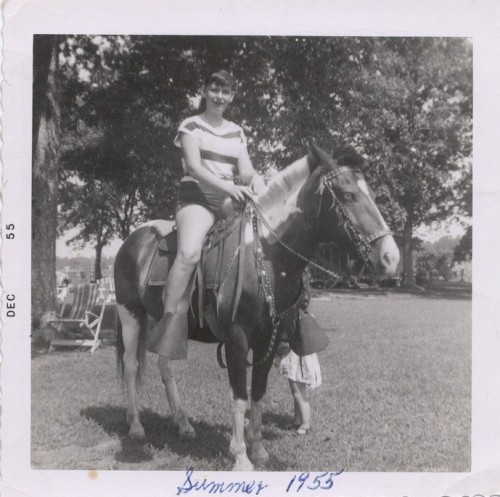 I can’t say for sure, but I’m guessing those little legs on the other side of the horse belong to me.

I also discovered this picture of me – sitting on Topsy. I was probably around 10 when this was taken. 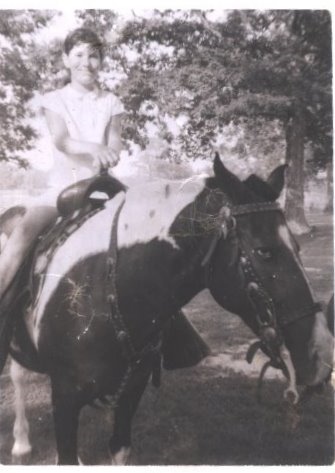 The location of the annual family gathering was changed to another uncle’s waterfront property sometime in the mid to late 1960’s. And it became  the “family reunion” rather than the weinie roast.  We no longer roasted hot dogs, but there was still an abundance of food. Another uncle began hosting the reunion in the early 1970’s, and it was held at his house until just a few years ago.

When the weinie roast first came to be, the family was my grandmother, her 12 children, and their spouses and children.  Grandma died in 1969, and the last of her children passed away earlier this year.

No one had plans for the family reunion this summer. So Motor Man and I decided to have it at our place.

My cousins and I know that the reunion will never be the same as it was in years past.  But it was important to me that the tradition continue.

There will be hot dogs. But no Topsy.  Update next week.