The Most Beautiful Sky

Our friend, Bev, joined us for our most recent trip to Corolla to see the wild horses. She and Motor Man were laughing at me because I kept commenting on how beautiful the sky was. They really teased me when I finally announced that it just may have been the most beautiful sky I’d ever seen.

But, later in the day, when Bev saw some of the photos I’d taken, I think she agreed.

Oh, and by the way, we saw wild horses under that perfect sky. Among them, this stallion and his two mares.   I learned a new horse term compliments of the Corolla Wild Horse Fund Facebook page: when a stallion steers the mares in his harem in the direction he wants them to go by lowering his head like this, it’s called “snaking”. (Motor Man wishes….)

Further along, we saw another stallion with his harem of three mares.

Did you happen to notice something else in the photo? Dolphins, very close to the shore. 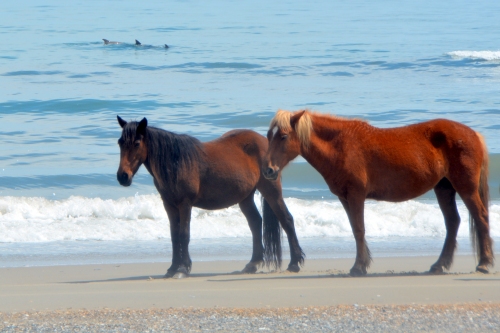 Once I uploaded my photos at home and compared them to some on the Corolla Wild Horse Facebook page, I learned that this handsome boy is the son of Amadeo, the blind stallion rescued from the ocean, who’s now a pampered resident of the Corolla Wild Horse Rescue Facility.  (We met him at the Open House last fall.)  You just never know who you’ll meet on the beach. 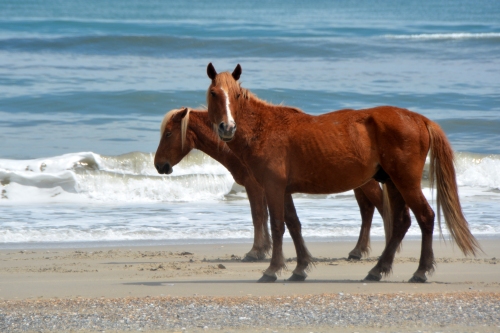 On our way back through the tiny village of Corolla, I took this picture of the Currituck Light. 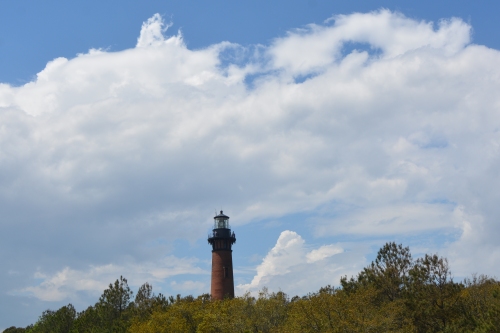 And if that’s not the most beautiful sky I’ve ever seen, it’s definitely in the top two.

16 responses to “The Most Beautiful Sky”