My mom was from a farming family, so she had many favorite sayings associated with the weather. One of those was: “April borrows twelve days from March”.

That seems to be the case this year.  We’ve had cool temperatures, strong winds, rain and even a little snow and sleet in the past week.

Last Thursday, Motor Man and I were returning home from a little drive just around sunset.  We saw storm clouds in the distance.

Motor Man drove me out on “the point” in our side yard, so I could take some pictures.  I told him that he could go on to the house if he wanted, that I would just come in later.

He said that he’d stay,  we could just sit in the vehicle, and I could get my sunset pictures.

Things began to change rather quickly. 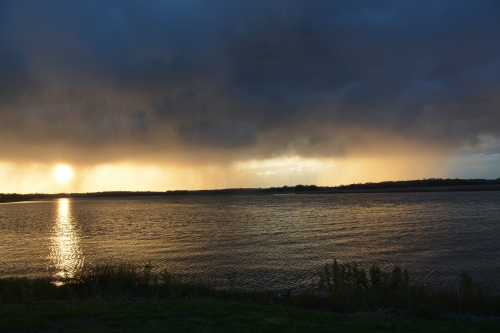 The sky darkened, the wind “picked up”… 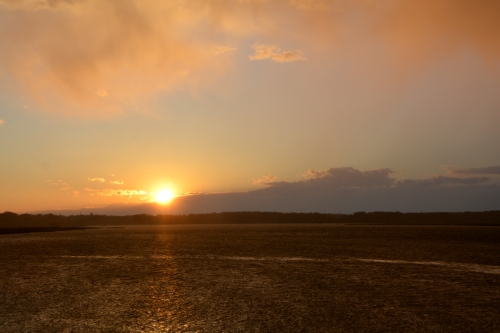 …and the rain came. Suddenly.

That Motor Man is so smart.  There would have been no way I could have made it to the house before that quick shower.

Many of our friends posted pictures of a rainbow that evening on Facebook.  We kept watching for one, but didn’t see it.

Hopefully after tomorrow, April will be done with March days, and we can get on with spring.

This entry was posted in Days at Home, Family, Sunrises/Sunsets and tagged april borrows twelve days from march, shower at sunset, storm clouds at sunset, sudden shower. Bookmark the permalink.