You may recall my post from November of 2013,  Up, Up And Away, where we helped launch a hot air balloon.

Or this post, where the hot air balloon event we recently attended at a local winery had to be cancelled because of wind.

Motor Man and I are in touch quite often with Mark, the owner of the balloon company. I received a message from him last Saturday night, saying that they would be launching early Sunday morning.  He thought I may like to come take pictures. (Now where would he get an idea like that?)

So it was a very early morning for us.  This was taken around 5:30, just as we were heading out the door.

About an hour later, the crew was filling the balloon with air. 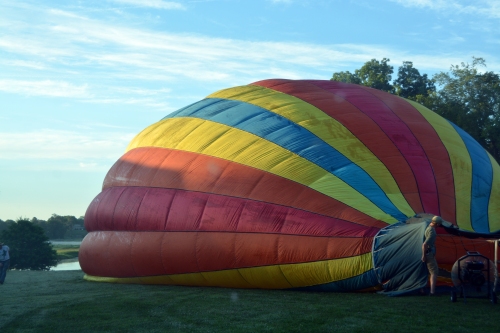 This is an interesting view from the other end of the balloon.

Things were definitely heating up. 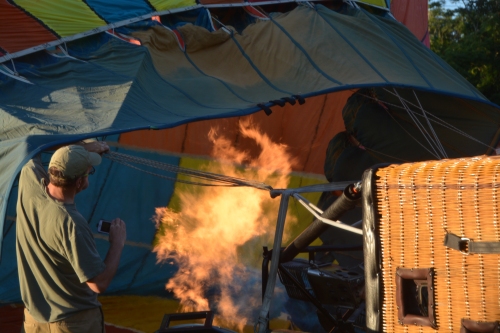 Soon, everyone was in the basket and ready for take off.

And that may have been for the best, since I didn’t have time to get nervous.

What an absolutely beautiful morning for a balloon flight.

Remember the photo I took last week from the James River Bridge of the recovered helicopter?  In this picture, you can see the bridge (to the far right) where I took the picture.

We became quick friends with another couple on the flight.  They had misplaced their Go-Pro camera, so Motor Man loaned them ours to use – with a promise that I would send them the images. (Hello? Tech support?) 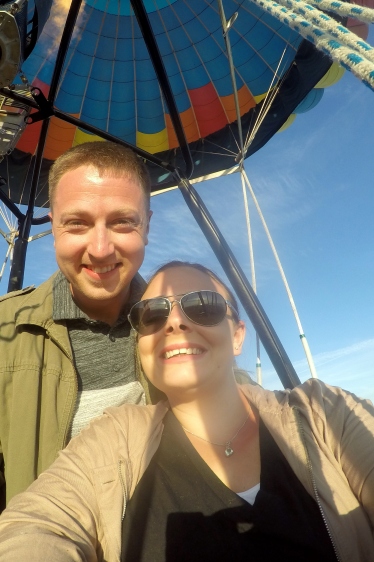 There was just one small problem with our balloon flight: there was NO wind at all that morning. So our ride, although beautiful, was a short one. I took this of our shadow as we were landing.

It was another fun experience with my Motor Man.

And, yes, I do believe I would do it again.