Those of you who have been reading this blog for awhile may recall previous posts I’ve written about my mom and her family. My mom was the third eldest of twelve children in her family born in the early 1900’s.

Mom and her siblings have all passed on, but “us cousins”  still gather yearly to carry on the family reunion that began before most of us were born. Motor Man and I were honored to once again host the reunion at our home Saturday. And one of my cousins brought a special treat for “show and tell”.

My Aunt Martha was the seventh born of the twelve and outlived all her siblings.  I wrote about her funeral back in January of 2011.  Aunt Martha’s talents were many,  including gardening, counted cross stitch and poetry. She was also an amazing artist.

Her daughter, Betty, brought to the reunion a memory book that Aunt Martha made in 1992, when she was 75 years old. The captions are done in counted cross stitch, and the scenes are a combination of fabric piecing, stitchery, quilting and painting. It’s difficult to tell the size from the pictures, and I didn’t think to measure it, but it’s approximately 18 inches square. I hope you’ll be able to click to enlarge the pictures in order to see the details.

The cover of the book is a scene depicting Aunt Martha’s parents, Ben and Mae (May) when they were married  in 1906.

The next “page” represents Aunt Martha’s birth in 1917. When she was born, there were already three girls, Mattie, Lucille and Donnie (Donnie being my mom) and three boys, Andrew, Charlie and Bob, in the family. 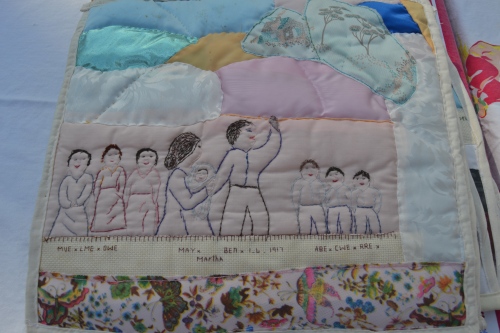 The next page celebrates the birth of the youngest sibling, Sarah, in 1925. The two girls in this scene are Margaret and Martha, and the three boys are Bennie, Thomas and Stanley.

This next page was really special to me. It’s Aunt Martha’s memory of the family moving into Bacon’s Castle (“The Castle House”) in 1923. They were living there when their Papa bought the family’s first car.

“Wash Day”.  Aunt Martha crafted this page in memory of her mother and in honor of her eldest sister, Mattie. 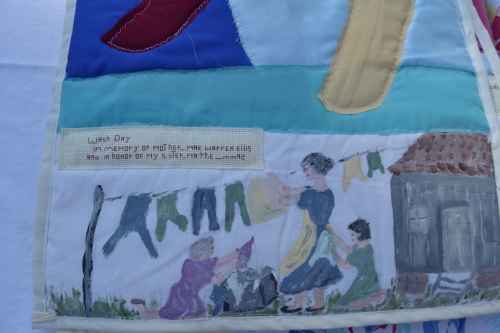 Brother Charlie and Old Tom, the mule. When Marshall and I saw this page, we immediately recognized the structure to the left. It was a barn with a “bell tower” that was located on the farm at Bacon’s Castle.  The barn was destroyed during a storm in the early 1990’s. (Because Marshall and I both worked as interpreters at the Castle, we had seen information and pictures of the barn.)

Brother Bob, Martha and Margaret. Apparently Bob was threatening to put out the fire in the nearby smokehouse. I love the image of the girls sitting on the fence.

We were all laughing at the caption on this next page. And I remember Aunt Martha telling me this story. Two of their cousins, Viola and Violet, were visiting the farm one day. Apparently whenever these two were around, they caused trouble. Here, the two of them, along with Martha and Margaret, were picking “sugar pears” and throwing them down the toilet hole. Aunt Martha, as always, just keeping it real.

I’m not sure of the memory behind this next page. Apparently Margaret and Martha (who by the way, were so inseparable that their mother sometimes called them “Mar-gratha”) once shot a chicken hawk. I’m guessing that’s Martha with the gun. 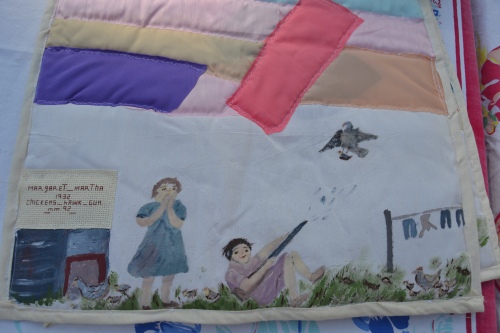 The caption on this next page reads: “Bob did not kill this hog with a rock. He killed it with a 2 x 4”. You just know there was a story there.

The final page in Aunt Martha’s memory book shows her and her husband, Joe. The caption is: Martha – Joe, 1935-1984, Love, Faith, Trust.  They were married in “the Castle House” on Christmas Day. 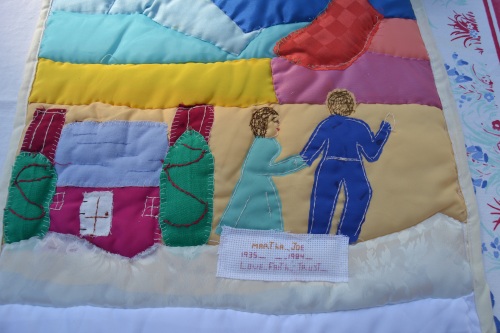 I thought it was interesting that Aunt Martha seemed to choose happy, carefree memories for her book. (Although she probably got in big trouble for that incident involving the pears.) We recall hearing our parents, aunts and uncles speak of their childhood, and we know that they all worked very hard, and life was not easy for them.

This book is a family treasure.