You Can’t Make This Stuff Up

Tuesday, I spent 50 minutes on the phone with a Microsoft tech, attempting to determine why Motor Man’s desktop computer wouldn’t communicate (wirelessly) with a new printer we just purchased. My first mistake was calling Microsoft, other than HP.  I just clicked on the 24/7 helpline icon on Motor Man’s computer.

I had to tell the first tech not to be so upset with me because I couldn’t understand what he was saying, and that I did NOT like his attitude.  He  then connected me with another tech, who was only slightly easier to understand. I gave permission for him to “take over” the computer, and he spent most of the 50 minutes telling me that we had malware, which had taken over the files on our computer, infected files, etc.  He said it was causing our computer to operate at a fraction of its capacity, and that this malware had caused the printer functions to be turned off.

I asked could he fix it, and this is what he said: if he removed what was causing the problems, it would just keep coming back. (Keep in mind that when we purchased the computer, less than a year ago, Best Buy installed Kaspersky anti-virus program on it. I asked the tech why that didn’t prevent this problem. He said that the Kaspersky program was for Windows 8, and our operating system is 8.1.)

I replied that, first of all, I wasn’t going to take a computer 132 miles one-way to have it repaired. And secondly, we could buy a new computer for not much more than $399.

The other option was to go with online support.  I learned that, as a female, if I’m over 40 (or for a male over 45), we could have online support correct the problem for only $199. He became a bit upset when I told him that I was NOT going to commit to the online support at that time; that my husband and I needed to discuss the matter. He didn’t like that answer much, but he had no choice. We ended the call.

A few minutes later, I googled “HP printer tech”, and found a downloadable program  that would research and correct printer connection problems. We downloaded the program, and five minutes later (and $0), we printed a test page.

Then I took two ibuprofen for the splitting headache I had and told Motor Man he owed me lunch. 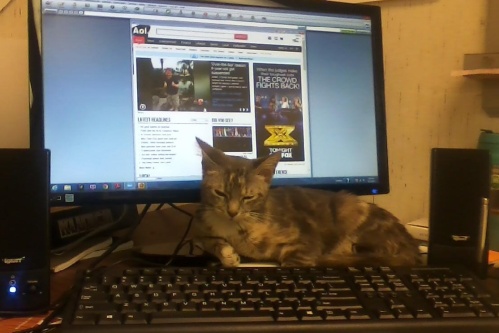 Perhaps I should have asked Gypsy’s advice. Ironically, this photo was taken one year ago Tuesday.