Since probably before I was born, this “little blue plate” hung by the front door of our house. 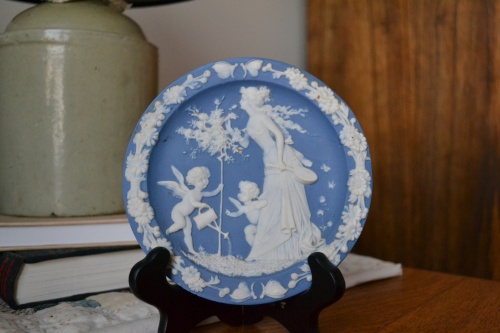 After I was grown, my Mom gave it to me. She said that it was on a bedroom mantle at Bacon’s Castle when she and her family moved into the house in the early 1920’s. She and her sisters shared the bedroom, and my mom “claimed” the plate.

Some time after she gave it to me (maybe a few months or even a couple of years later), this was a conversation we had one day while Mom was visiting:

Mom:  “I gave you that little blue plate, but I haven’t seen it since then.”

Me: “It’s in the china cabinet. I was afraid to hang it on the wall, because I don’t want to take a chance on it getting broken.”

Mom: “Well, I had it hanging on the wall all those years, and nothing ever happened to it.”

I then went to the china cabinet, took out the plate and brought it to the sofa where Mom was sitting.  The string attached to the back of the plate was just a simple little piece of cotton twine. “We” decided to perform a little test.

I tugged gently on that string.  And it broke. So the plate went back into the china cabinet, where it’s been ever since.

When Mom gave this to me, I wasn’t familiar with Wedgewood. Even after realizing what it was, I was unable to find any information about this particular design.  A few years ago, a local museum offered an appraisal event by Sotheby’s. I took the little blue plate, and it was appraised for $750.

The plate may be worth that figure. But there’s no way I could put a price on the memories that it brings.

This entry was posted in Family and tagged Bacon's Castle, wedgewood plate. Bookmark the permalink.

18 responses to “That Little Blue Plate”